Mundus Magica is an urban fantasy, 21st-century, magepunk world that treads the line between utopia and dystopia. Skeletons, automatons, and catgirls squeeze against each other on crowded subway cars, each of them just another cog in the vast machinery of enterprise and exploitation that makes the world go round. The proliferation of magitech has raised the standard of living for many, but it has also thrown the divide between the Old World and the New into stark relief, and the endless drive for new arcane advancements results in cataclysmic disasters on a regular basis. But this unstable equilibrium is about to tip over. Strange sightings of individuals harnessing magical power without technical intervention threaten to upset the world order - but for better or for worse? 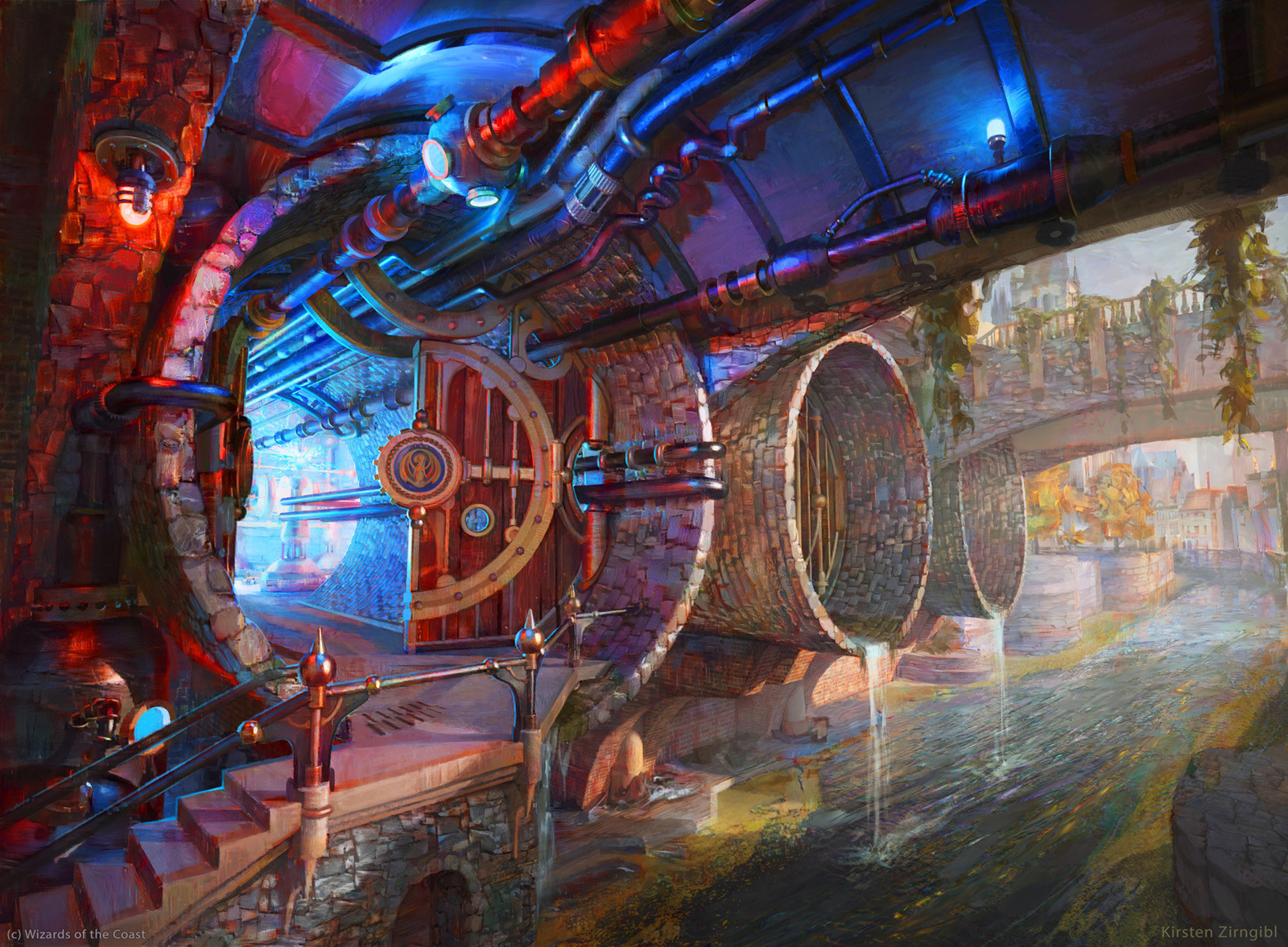 The term ‘magepunk’ is a riff on the punk genre, which includes subgenres such as steampunk, cyberpunk, and solarpunk. There are certain elements of the punk genre that I was interested in exploring in Mundus Magica - namely, an anti-establishment sentiment, a focus on technology and how it pervades and transforms society, and exploring social themes through the medium of speculative fiction.

Since the themes and aesthetics of cyberpunk were first imagined in William Gibson’s seminal text, Neuromancer, the genre as a whole has become emblematic of certain tropes: relentless cynicism, a dystopian future, ecological collapse, authoritarian and corporate oppression, transhumanism, and advanced technology used and abused at every level of society. 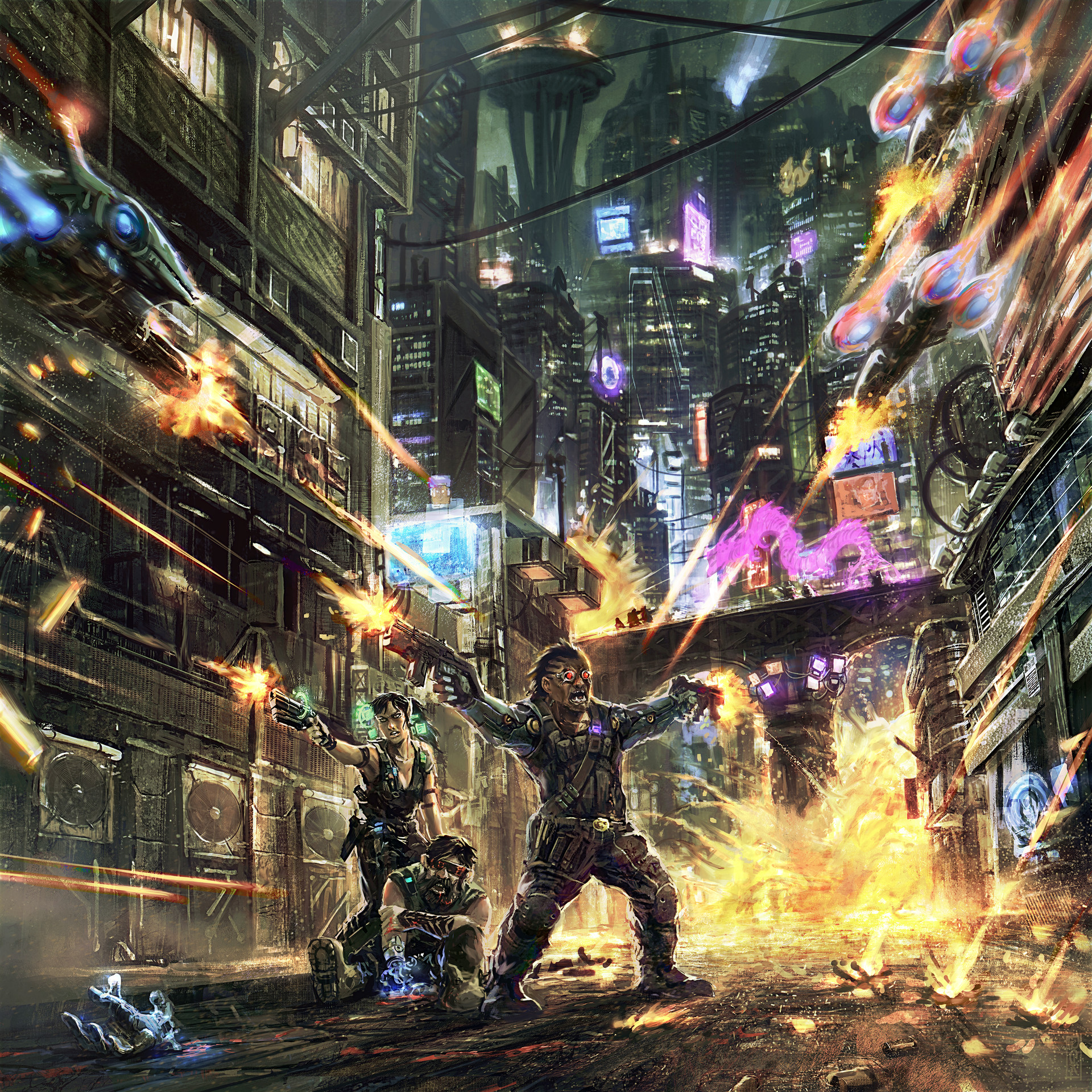 I kept these tropes in mind while building Mundus Magica, whilst knowing that I wanted to take this setting in a different direction. I wasn’t looking to write straight cyberpunk, and even cyberpunk blended with magic has already been done in Shadowrun. Furthermore, I didn’t want to depict a complete crapsack world as is de rigeur in cyberpunk - I was looking for something that straddled the line between dystopia and utopia, showing the positive aspects of technological advancement alongside its negative ramifications. The post-cyberpunk genre moves in this direction, and I draw on this approach without necessarily situating Mundus Magica in the cyberpunk genre.

To go even further in the direction of hope and positivity, the relatively new genre of solarpunk paints a picture of harmony between nature and technology, of diverse, egalitarian communities focused on craftsmanship and art, of decentralised power and participatory democracy. In short, an antithesis to both the dystopian nightmare that cyberpunk portrays, as well as the prelude to that nightmare that we live in currently. 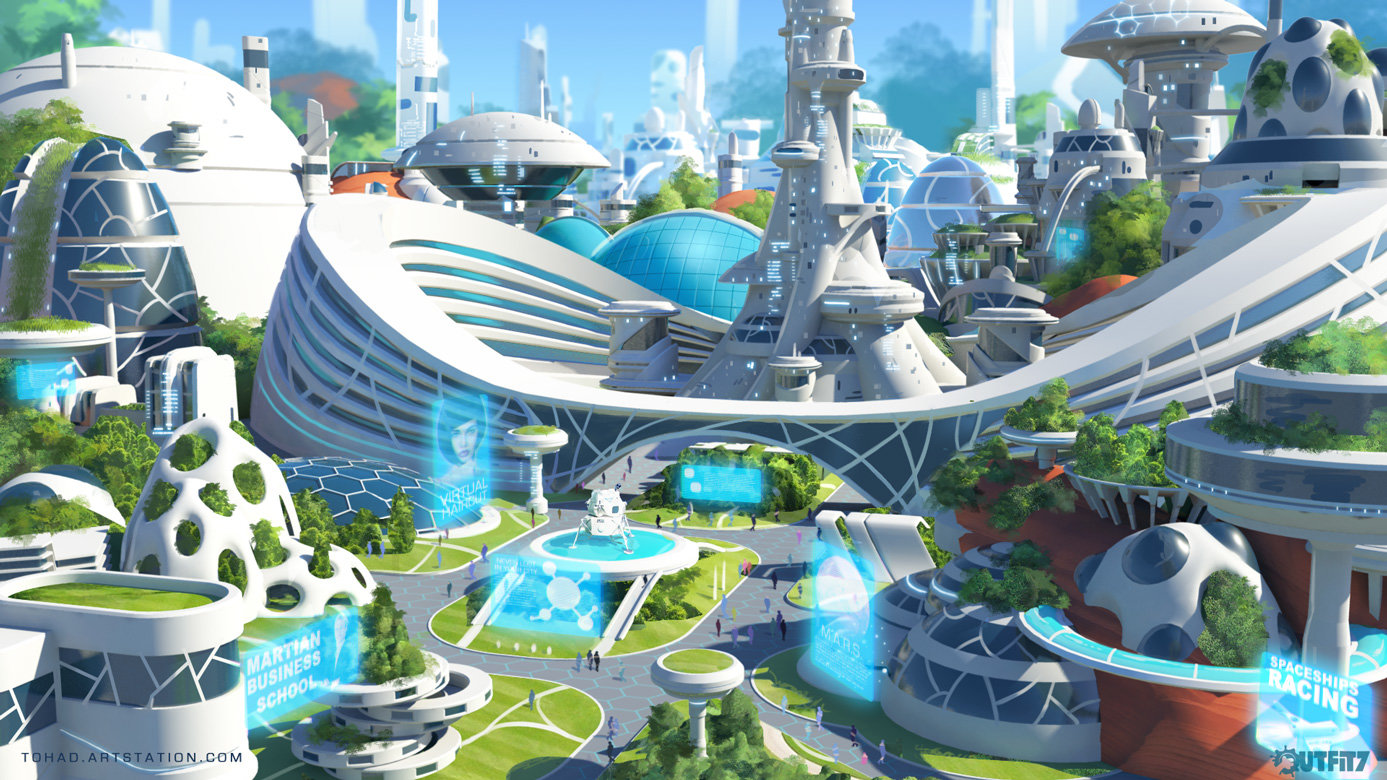 Where cyberpunk uses speculative fiction to take the conditions we live in (rapid technological advancement, increasing consolidation of power in the hands of corporate monopolies and oligarchies, environmental exploitation) and extrapolate them to their terrible end points, solarpunk arises to some extent as a counterculture to this entire project - it recognises just how undesirable that future is, and uses speculative fiction to map out a route that brings us to what it envisions as a better world.

I wanted to incorporate certain elements of solarpunk into Mundus Magica, such as integration of nature into society, and an emphasis on self-actualization, as well as compassion and equality. Attempting to reconcile these elements with the cyberpunk influences listed above inevitably gives rise to tension, which is by design - this sets the stage for protagonists, whether they be player characters or not, to enter the picture and become actively engaged in an ongoing conflict that 1) goes to the core of the setting, and 2) helps the reader or player to process and understand issues that they may be only peripherally aware of in their lives.

With that said, why reinvent the wheel? An entire proliferation of punk subgenres that deal with similar themes exist - why not pick one of them and work within it? Firstly, magepunk isn’t cut from whole cloth - aside from the abovementioned influences, it draws from urban fantasy and dungeon punk as well. 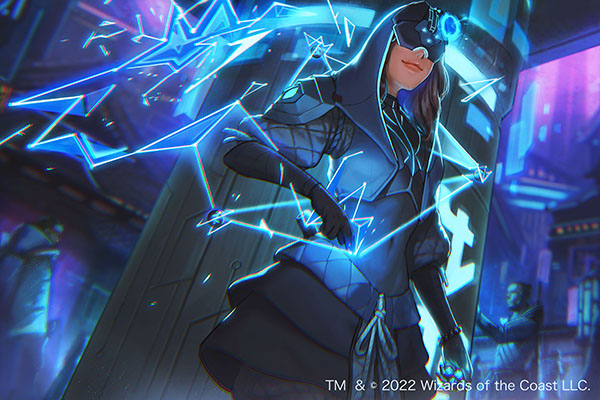 Settings such as Keith Baker’s Eberron, China Mieville’s Bas-Lag Cycle, Max Gladstone’s Craft Sequence, or Magic: The Gathering’s Ravnica, Kaladesh and Kamigawa (as of Neon Dynasty), also operate in this space, using fantastical resources to power modern technology and society. Secondly, as far as I am aware, this particular subgenre isn’t well-established enough to have its own appellation. Eberron leans more into dungeon punk, but settings that move towards modern-era aesthetics don’t seem to fit this tag as well. ‘Arcanopunk’ has been tried, but I personally think magepunk is neater and rolls off the tongue better.

The reason I chose mage, versus cyber, steam, diesel, desert, bio, or any other flavor of punk, is simply that I enjoy magic more. However, the kind of magic I enjoy reading about isn’t the sword-and-sorcery, classical high fantasy style of magic, where magic is some unknowable force that functions primarily as a plot device. I’ve always been more interested in seeing how a world with magic develops around that magic, and how the people who practice it apply it in their lives. Whether it’s sympathy, sygaldry, or artificing in the Kingkiller Chronicles, thaumaturgy, golemetry, or fleshsculpting in the Bas-Lag Cycle, or the Skill and the Wit in Robin Hobb’s Realm of the Elderlings, learning about how magic is used in the world is more exciting to me than the magic in and of itself.

Given that Mundus Magica is intended to be a 21st-century world very similar to our own, my approach was to consider how magic could be used to enable and support the systems that make this possible. Following in the punk tradition, I wanted to place an emphasis on technology - on people creating tools, machines, and techniques to harness and apply natural principles to improve their lives. Thus, magitech.

Magitech is the fusion of machinery or technology with something that is overtly magical - an everburning flame powering a steam engine, for instance. One of the first examples of this trope in media comes from Final Fantasy VI, which coined the term ‘magitek’, with captive elemental spirits being used to power mechanical walker suits and their weapons systems. The trope is also present in tabletop gaming - the elemental airships and lightning rails of Eberron, the pyroconvergers and gearhulks of Magic: The Gathering, and of course artificing in D&D. One example of magitech in D&D that I’ve been particularly inspired by is Gramarie, a fanmade magic system designed for 3.5e. Unconventionally for homebrew D&D content, Gramarie focused on non-combat aspects of magitech, giving players the ability to create magical engines, synthesise supernatural materials, and create and sculpt extraplanar spaces. One could imagine these tools being used to change or take over the world without rolling initiative even once.

What does this mean for Mundus Magica? Firstly, magitech is situated within the existing cosmology, i.e. the leylines. In-universe, there is no awareness of the leylines, only observation of their effects on the world, which are viewed as natural principles in the same way that gravity and magnetism are in our world. Secondly, the endpoint of magitech in Mundus Magica is a 21st-century modern (indeed, post-modern) world. 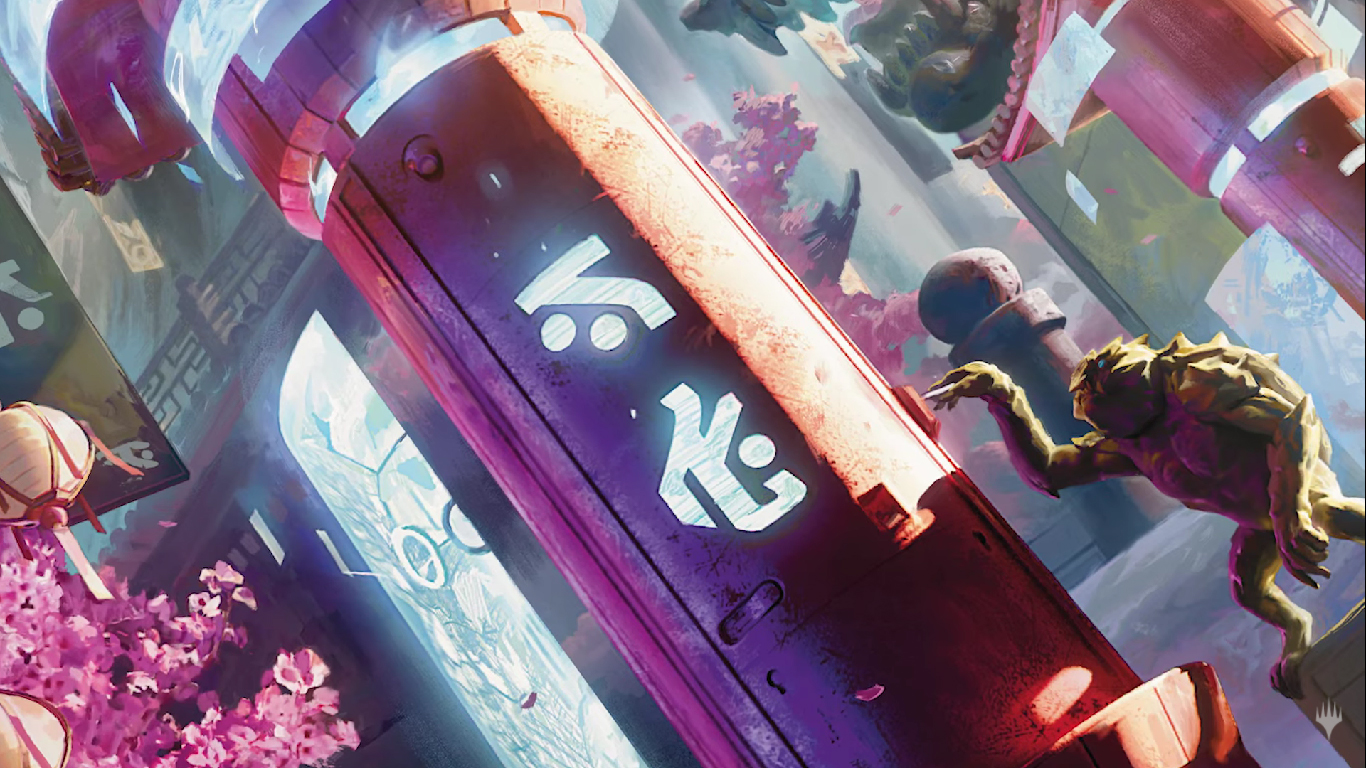 Here, ONEiros originated with the Dreamers Beyond, a sect of monks that practiced a form of meditation influenced by the Mind leyline, which allowed them to share thoughts and dreams with each other. Advanced practitioners would, as they aged, enter meditative trances that brought them into the shared dreamscape while practicing self-mummification, which they viewed as the highest form of enlightenment - transcending the physical form to set one’s mind free of earthly constraints.

Even after their physical bodies died, Dreamers’ minds would continue to sustain the shared dreamscape, essentially becoming a server, with their preserved bodies treated as holy relics by the Dreamers Beyond. However, as the utility of the shared dreamscape for transmitting information became well-known, businesses began to explore the possibility of creating their own servers, and devising artifacts that could read and send information to a dreamer without the user having to enter the dream themselves. This was eventually expanded into ONEiros, with access to global telecommunications widely available and integrated into every aspect of life.

The example of ONEiros illustrates a few points. Firstly, it establishes an Internet-equivalent that is an indispensable part of a 21st-century setting. Secondly, it uses the magical concept of a shared dreamscape to make this possible. Thirdly, it shows that magic is not directly accessible to individuals, who must use the medium of technology, bringing in the ‘tech’ aspect of magitech. The Dreamers Beyond were inspired by the concept of sokushinbutsu (即身仏), a form of ascetic self-mummification reportedly practiced by certain Buddhist monks, who viewed it as a form of further enlightenment. With devices that grant easy access to the dreamscape network readily available, few individuals would be inclined to learn the meditative practices that dreamsharing originated from, much less create or become a server themselves.

ONEiros is only one example of magitech in Mundus Magica, and there are many more that I haven’t yet fully fleshed out. Do let me know on Twitter or Facebook if you’re interested in reading more about it, or if you have questions about the setting.

In the next article, I’ll elaborate on the influence of anime and manga on Mundus Magica, and list some examples that I’ve drawn influence from in developing the world.