Mundus Magica is an urban fantasy, 21st-century, magepunk world that treads the line between utopia and dystopia. Skeletons, automatons, and catgirls squeeze against each other on crowded subway cars, each of them just another cog in the vast machinery of enterprise and exploitation that makes the world go round. The proliferation of magitech has raised the standard of living for many, but it has also thrown the divide between the Old World and the New into stark relief, and the endless drive for new arcane advancements results in cataclysmic disasters on a regular basis. But this unstable equilibrium is about to tip over. Strange sightings of individuals harnessing magical power without technical intervention threaten to upset the world order - but for better or for worse?

Mundus Magica is a setting I’ve been working on for a while. I intended to use it as the backdrop for a RPG book, but through the process of building it, I found that there were other stories I wanted to tell in it. The main reasoning behind the cosmology of the setting is grounded in my desire to find a different set of classical elements (air, fire, earth, water, etc) to form the foundation of the world. I was working on the same formula to an extent, but I was looking for a different perspective to approach it from, and to influence how I built the world, so that it would feel fresh and interesting to me.

What I eventually settled on was a set of seven concepts - Mind, Space, Life, Spirit, Death, Matter, Energy. I blended these with the idea of leylines, lines or paths existing in geography that are attuned to some form of mystical power. If this sounds like it was stolen from the Arcanum and Watchtowers of Mage: The Awakening… that’s because it is.  The Arcanum were an aspect of Mage: The Awakening that I was interested in expanding on independently of the other aspects of lore that came with that setting. In some ways, Mundus Magica is my way of doing so.

Another element that I drew from Mage: The Awakening was the distinction between the Fallen and Supernal World, or - to trace it back to its roots - the allegory of Plato’s cave. In Mundus Magica, the world that most people see and live in is the Shadow World, a second-order simulacrum cast by the metaphysical light of the leylines. A select few, known as delvers, are able to see through this illusion and glimpse the leylines themselves, in an event known as Awakening. This is typically brought about by a delver becoming attuned to a leyline while rejecting the world around them, allowing them to pierce the veil. Delvers and Awakening will be elaborated on in another article, but I wanted to touch on them here to show how the leylines are directly relevant at the player’s level. 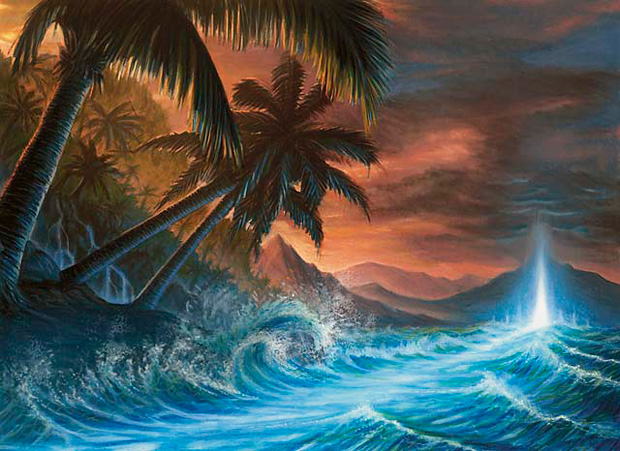 Each leyline is intended to hold sway over a broad category of physical and metaphysical phenomena, as indicated by their names. I have intentionally refrained from enumerating such phenomena here, so as to keep the precise scope of these categories open and flexible, capable of being adjusted as needed.

These seven leylines, each keyed to a particular fundamental aspect of reality, would be the foundations of Mundus Magica. The geography of different regions of the world, the people and monsters populating them, the type of magic practiced, the power structures that came into being - all of these elements could be grounded in the leyline(s) that prevailed in that place.

For instance, one of the first cities I imagined, Halcyon, was always intended to have an unreal cityscape (think Inception and Doctor Strange), built around the power to fold and bend space to make up for the fact that it’s a small island with limited land. It was natural, then, to situate Halcyon on the nexus of the Mind and Space leylines - city planners are able to make use of the space-warping properties of this nexus to realise the designs they have in mind, regardless of the ‘real’ land space available.

The Halcyon example also illustrates that magic plays an overt role in the world, and this is viewed as normal in-world. In making this design choice, I had in mind Arthur C. Clarke’s adage, “any sufficiently advanced technology is indistinguishable from magic,” as well as the need to balance the familiar and the strange. From the outset, I wanted Mundus Magica to look familiar at first glance, with just enough fantasy thrown in to challenge the assumption of normalcy and get the viewer interested in finding out more.

This meant integrating magic into the world in fundamental ways, while at the same time presenting these features in an everyday, unremarkable way in-universe. Mundus Magica is built on what we, the audience, would recognise as magic, but its residents would simply take this for granted as normal. In some ways, magic is analogous to a natural resource in this world, which in turn raises interesting questions. How is it gathered, or harnessed? How is it applied, and are there consequences for its use? How does it shape the communities around it?

Another question I considered was what raw magic as a resource should be called. I settled on ‘mana’ for a number of reasons - chiefly, convenience, recognizability, and calling back to the setting’s video game influences. There are two aspects of mana I wanted to expand on. Firstly, mana, as the shorthand for raw magical power, acts as a metaphor for various natural resources and driving forces in our own world - electricity and fossil fuels, for instance. Secondly, I construed mana in this setting as accreted cognition - a resource that accumulates in the environment, or in an object, over time as a result of sentient beings observing, contemplating, or even revering that place or thing. As such, the intrinsic nature or value of the thing or place becomes almost secondary - it is the significance that people attach to it that vests power in it.

Mundus Magica, as a magepunk setting, is intended to hold up a twisted mirror to the world we live in, with a particular focus on its flaws and threats. Even when dealing with the powerful plot device of magic, I always intended for themes such as scarcity and environmental exploitation to be present and important in the setting. For example, mana is intended to be a renewable resource in Mundus Magica - it accrues over time as a product of sentient thought. But as with other ‘renewable’ resources in our world, such as solar or wind energy, the rate at which it can be produced or captured is far below the rate at which people consume it. Rather than being a phlebotinum-esque solution to the energy crisis, mana serves as an analogue to conventional sources of energy, fantastic enough to intrigue the imagination while remaining solidly grounded in real-world issues.

Having established that mana exists as a resource in this universe, we then come to the question of how it is gathered and used. In designing Mundus Magica, I wanted to avoid the traditional high-fantasy setting full of wizards slinging fireballs around casually - I was aiming for something closer to Eberron, where magic is prevalent, but in a more low-key way. The average person can’t shoot fire from their hands or fly under their own power, but they can speak with another person on the other side of the world instantaneously or take public transport teleportation services.

Mana cannot be harnessed and applied directly, but must be accessed through technical mediums, such as artifice, alchemy, or advocacy. This rule serves as a metaphor for how some technical fields in the real world seem to fall foul of Clarke’s law (mentioned above) - so arcane and powerful as to seem magical from an untrained perspective. Science and technology can quite clearly fall under this category, but there are aspects of, for example, law and finance that are both incomprehensible and deeply influential on people’s lives. It was this observation that I wanted to lean into when I coded magic in this way - as you engage with and enjoy fantastic worlds and magic systems, remember that such elaborate systems of power do exist in the real world, and you’re living in them.

In the next article, I’ll expand on what magepunk means, and give some examples of what magic looks like in Mundus Magica.