Previously, we considered the recent Mages of Strixhaven Unearthed Arcana and the cross-class subclass model presented therein, as well as the possibilities that this new design paradigm might bring to character options and setting supplements going forward.

It must first and foremost be acknowledged that the cross-class subclasses presented in the Mages of Strixhaven UA are not without their flaws. This is to be expected from UA content, which is more of a proof of concept rather than a polished final product. It is more instructive to consider how these flaws reflect on the design philosophy behind the cross-class subclass model, and what steps might be taken to address them in order to keep the model viable for the future.

In this article, we will take a broad view of the Mages of Strixhaven UA subclasses to identify general issues that are pertinent to the cross-class subclass model as a whole, consider the underlying reasons behind these issues, and posit possible solutions to these problems.

At the outset, it is important to understand what the Mages of Strixhaven UA is and is not. The UA sets out five subclasses, each of which can be taken by some combination of Bard, Druid, Sorcrerer, Warlock, and Wizard. It is focused on these classes due to the theme of the UA - Strixhaven is a school for mages, so it makes sense that subclasses built around this theme would be centered on full casters.

However, there is a notable exception here. Clerics are not accounted for anywhere in this UA, despite being a full casting class, and being thematically suited for the Lorehold and Silverquill colleges. This is too glaring an oversight to be accidental - there must be a specific reason for omitting the Cleric from this UA, and the cross-class subclass model, entirely.

As it happens, the current iteration of the cross-class subclass model does not have the capacity to account for unique class features like Channel Divinity. All features granted by a subclass are shared by all classes that take that subclass, and if Channel Divinity were to be included in those features, this would mean granting it to classes outside of Cleric, which could be problematic. This bars classes like Cleric and Paladin from participating in this model, as their Channel Divinity options are directly linked to their subclasses.

Clearly, the sustainability of the cross-class subclass model is questionable if two whole classes are incompatible with it. But is it necessary for all features granted by a given subclass to be shared? Would it be possible, for instance, to create Channel Divinity options for the Lorehold and Silverquill colleges that only Clerics would have access to?

One possible counterargument would be that if this were the case, the other classes in those colleges would be at a disadvantage relative to Clerics, since they get one less feature from taking that subclass. This is a valid contention, but it, too, can be addressed. Why not grant, for example, each Silverquill class a unique thematic feature in addition to the shared subclass features? For instance, Silverquill Bards could gain access to special uses for Bardic Inspiration or Countercharm, Silverquill Warlocks could gain access to a unique thematic invocation, and Silverquill Wizards could be allowed to scribe spells with verbal components with less time and expense.

It should be acknowledged that this approach risks making these subclasses feel cluttered with too many features. Adopting this approach would require rethinking how the current subclasses are designed, and possibly redesigning them to pare down the shared subclass features slightly, so as to make space for such unique class features.

Why go to all this trouble?

Firstly, this approach creates the flexibility required to bring Cleric and Paladin into the cross-class subclass design paradigm along with all the other classes. This is significant enough that it merits consideration on this basis alone.

Secondly, this approach opens up possibilities to work with other unique class resources, such as Bardic Inspiration or Wild Shape. Another criticism that might be levelled at the cross-class subclass model is that the unique identity of the class tends to fade into the background -  playing a Quandrix Wizard may not feel too different from a Quandrix Sorcerer, for example. This approach creates the space to design unique Quandrix Font of Sorcery options for Sorcerers, or ways to use Arcane Recovery for Wizards, so that the mechanics of their original classes can be used to reinforce the subclass theme, instead of being relegated to the background.

Thirdly, this approach also serves to remedy a seperate issue with the cross-class subclass model, which is that different classes gain subclass features at different rates. Page 2 of the UA explains that a Lorehold Bard who reaches 14th level would be able to pick either War Echoes (the Lorehold 10th level feature) or History's Whims (the Lorehold 14th level feature), but not both, unlike non-Bard characters. Unfortunately, short of redesigning how frequently Bards gain subclass features, it seems difficult to resolve this issue. However, it would be possible to fill this gap by creating a unique subclass feature for the Lorehold Bard at an earlier level that grants some additional benefit at 10th level, to prevent Lorehold Bards from feeling shortchanged.

Lastly, this approach allows designers to be cognizant that classes which are grouped under the same thematic subclass category may still have distinct play patterns, and design features accordingly. Consider a hypothetical subclass that thematically grouped Monks, Paladins, and Sorcerers together. In combat, each of these classes plays a different role, with distinct action loops and resource usage, making it exceedingly difficult to ensure that each shared subclass feature is both thematic and relevant to each of the classes in this subclass. A cross-class subclass model that provides for both shared and class-specific subclass features gives designers the flexibility to balance thematic connection with mechanical viability, and allows for more nuanced design.

Note that this approach should not amount to creating a new subclass for each class - this is not about designing a full suite of unique features for a Lorehold Bard, Lorehold Cleric, and Lorehold Wizard. The core features of the subclass should remain shared, while leaving just enough space for a unique subclass feature for each class. 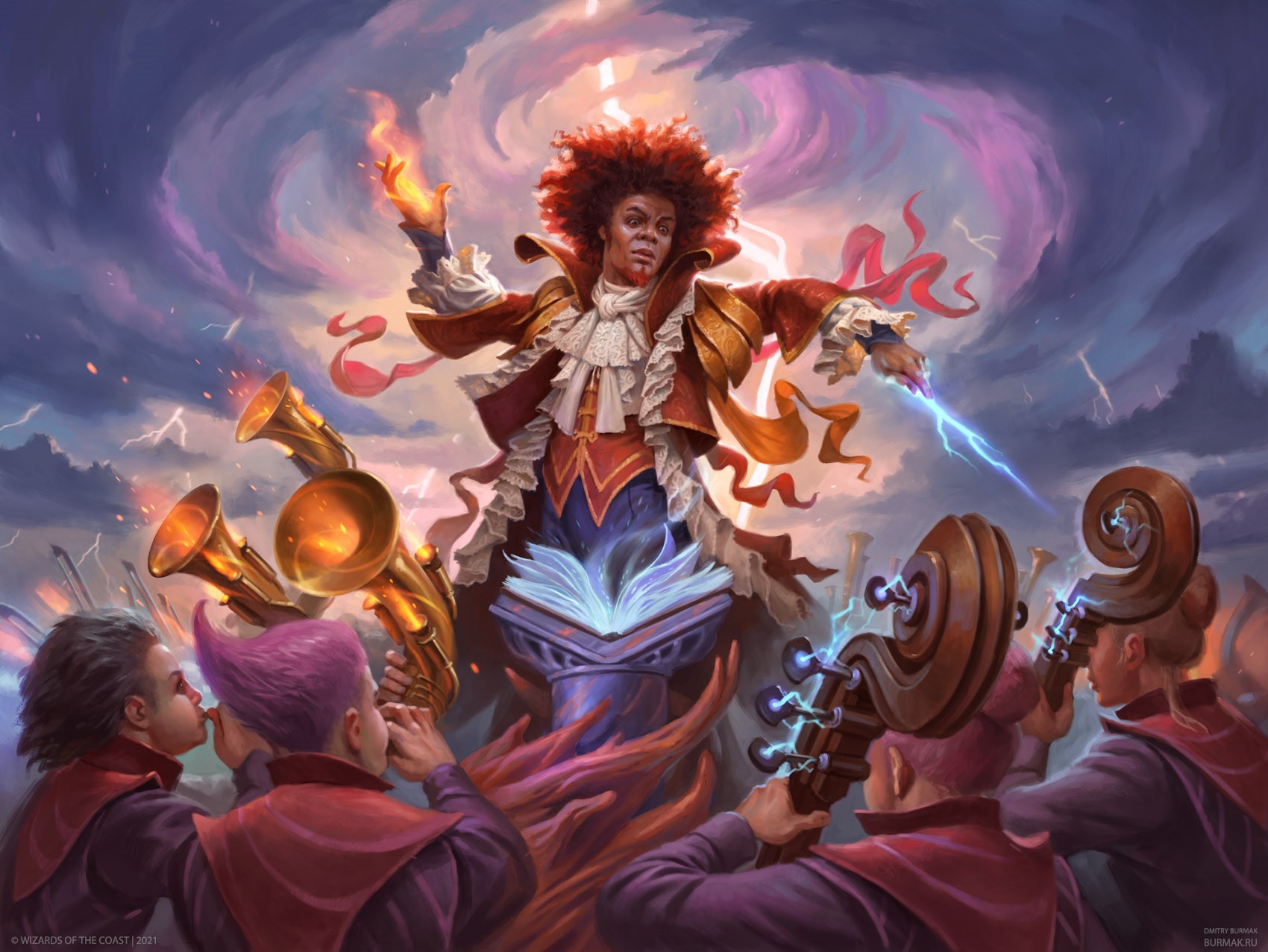 Another notable miss in the Mages of Strixhaven UA was the omission of Bards from the Mage of Prismari subclass. Given that Prismari is all about creative expression through magic, leaving Bards - the poster children for this concept- out of the picture was a clear flavor fail.

Yet it wasn't without justification. The Prismari subclass features are predominantly about using spells that deal Fire, Cold, or Lightning damage, and the Bard spell list is very light on such spells. This also explains why Druids, which didn't seem to have much thematic connection to Prismari, were included in the college - their spell list matched the subclass features better.

But if the Bard spell list was the issue, why not simply include spells related to Fire, Cold, and Lightning on the Prismari spell list? For that matter, why not have a Prismari spell list? This is another inconsistency with the Mages of Strixhaven UA - Lorehold, Quandrix, and Witherbloom have thematic spell lists, but Prismari and Silverquill don't have spell lists at all. There does not appear to be any particular compelling reason for this to be the case.

As previously discussed, spell lists are a simple and effective way to merge theme and mechanics, and it would make sense for each college to have its own. Giving each college its own thematic spell list would also ensure that any subclass features which rely on spells of a certain type can function regardless of individual class spell lists.

Consider the hypothetical Prismari spell list below, which 1) enables Bards to learn spells that deal damage of the relevant type, thereby benefiting from the Prismari subclass features, and 2) grants the other classes access to some thematic spells that they might not otherwise have.

This approach also enables the designer to build subclass features around certain types of spells, whilst ensuring that any character who takes that subclass will have access to the relevant spells by adding them to the subclass spell list. For instance, a hypothetical Azorius Lawmage subclass might have spells such as ensnare or command on its spell list, meshing with subclass features that enhance the character's ability to restrain or issue orders to others.

It is important to keep in mind that the solutions discussed here are not definitive answers to the issues that have been identified, but potential ways forward that need further consideration and development. At the same time, this article does not purport to have exhaustively mapped the potential pitfalls of the cross-class subclass model - other issues will almost certainly become apparent in time.

However, this stands against the negative knee-jerk reaction that many in the D&D community have had to the Mages of Strixhaven UA and its flaws, leaping to the conclusion that the cross-class subclass model is a complete non-starter that is doomed to failure from inception.

The Mages of Strixhaven UA warrants a closer look, not because of its flaws but in spite of them. In it, we glimpse a new design paradigm that draws on beloved and successful traditions from the past, alloying them with modern design sensibilities to forge a new way forwards for 5e. It may ultimately transpire that this is a stretch too far, and the fundamental design of 5e is incompatible with a cross-class subclass system. However, this is a conclusion to be drawn only after further iteration and playtesting, or at the very least after the new design paradigm has been given a fair chance - by the community as well as the designers.

The next article will evaluate each of the subclasses in the Mages of Strixhaven UA, assessing their thematic merit, mechanical balance, and fun factor, as well as considering how they could be improved.

Thanks for reading this article! If you enjoyed it, consider following us on Twitter or Facebook to receive an update when the next one goes live, and/or sharing it to your friends with the links below!