The latest (as of the writing of this article) Unearthed Arcana from Wizards of the Coast has dropped, and it's a spicy one! 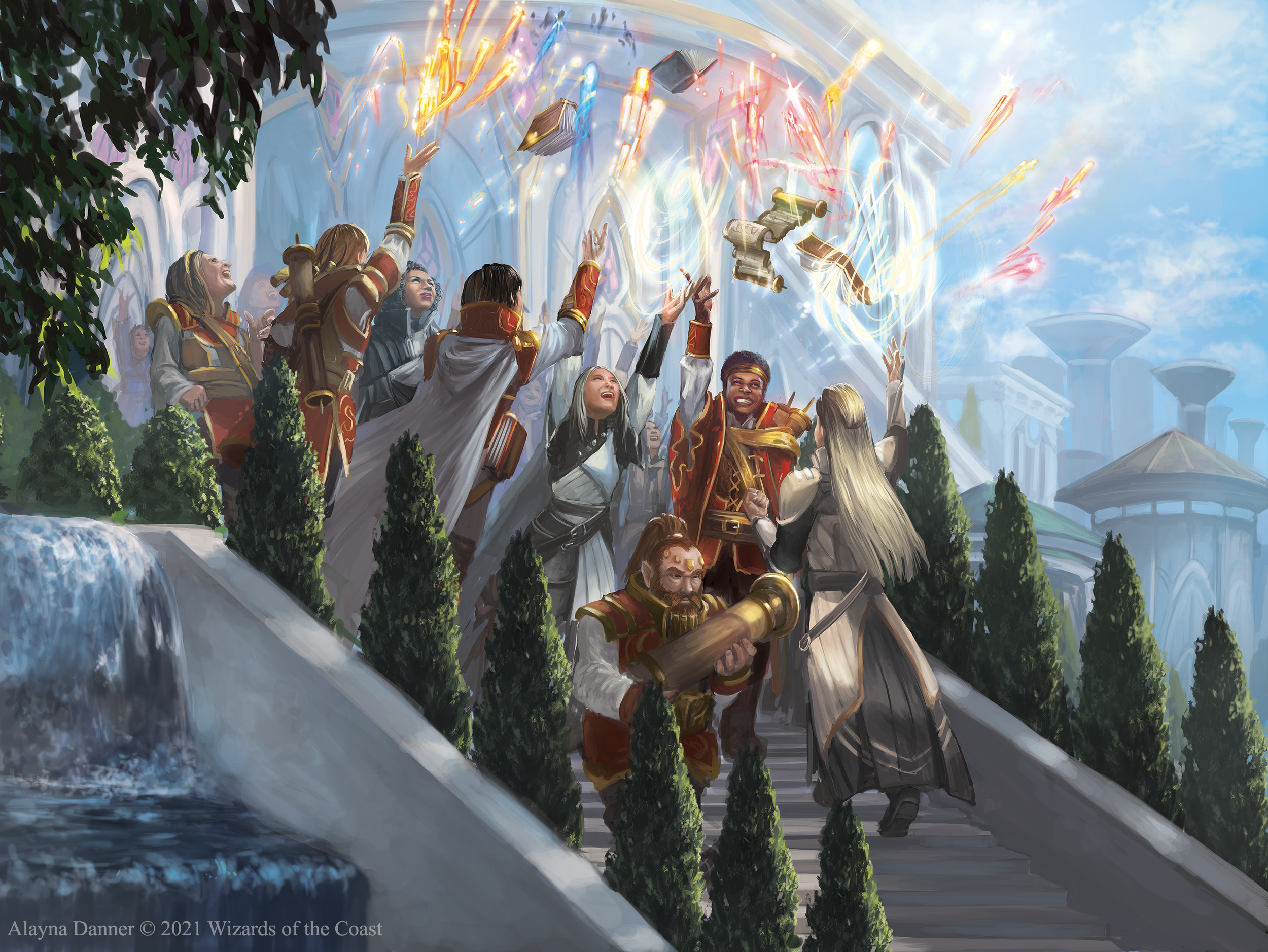 Strixhaven will be receiving its own setting book later in 2021, and this UA seems to be a sneak preview of some of the character options that the supplement will feature.

Mages of Strixhaven breaks into new, uncharted territory (for 5e, anyway) by introducing subclasses, or 'colleges', that are available to more than one class. The colleges and the classes that can take them are as follows:

This novel approach breaks away from the existing class-subclass design paradigm that 5e has maintained to date. Some players have noted similarities between this model and D&D 4e's Paragon Paths, or archetypes from Pathfinder 2e. Indeed, allowing characters of different classes to take the same subclass almost seems to hearken all the way back to D&D 3.5e's prestige classes!

This article considers previous setting supplements to better understand the significance of this new design paradigm, and what it could mean for new supplements going forward. One issue that WOTC runs into when developing character options for new settings like Strixhaven is the fact that there are twelve (thirteen, counting Artificer) classes, each of which might warrant more than one subclass that's thematic to the setting.

Learning From The Past 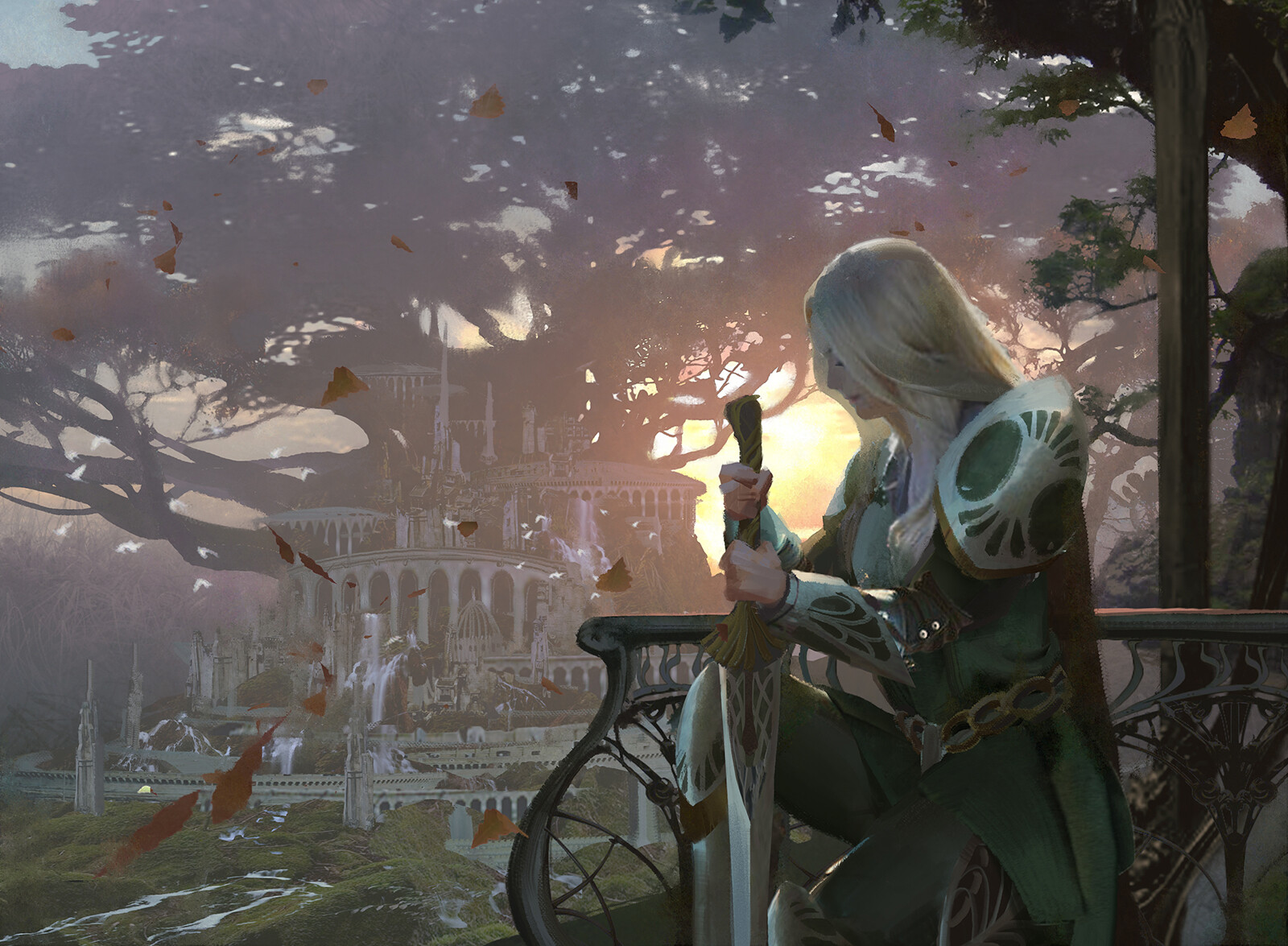 The previous setting supplement that was heavily focused on setting-specific factions was Guildmaster's Guide to Ravnica ("GGtR"), which was actually pretty light on crunch - it only had a few new races, two new subclasses, and two new spells. Notably, the subclasses that it introduced were generic on the surface - the Order Domain for Clerics, and the Circle of Spores for Druids, though they had some thematic connection to the Azorius and Golgari guilds respectively.

However, GGtR did attempt to implement one of the strongest themes of Ravnica, the guild system, in mechanical terms. It did so by making each of the ten guilds a background, rather than developing seperate subclasses. For instance, the Azorius Functionary background grants the character access to some thematic Azorius Guild Spells, such as command and counterspell. In contrast, a character who took the Dimir Operative background would get access to spells like disguise self and pass without trace.

Guild Spells set the guild backgrounds apart from regular backgrounds, and enable characters to feel like they're gaining a meaningful mechanical benefit by virtue of belonging to a guild, whilst maintaining a great deal of flexibility in terms of character builds. That said, some players might prefer to have their guild's unique strengths codified in the form of subclass features or new spells, aspects which GGtR was rather light on.

Further, characters who don't get access to spellcasting don't get to enjoy any such connection between theme and mechanics. GGtR did not feature any unique martial subclasses such as a Boros Legionnaire Fighter or a Gruul Berserker Barbarian. Instead, GGtR recommends refluffing existing archetypes to fit thematically within a guild, such as Champion Fighter or Berserker Barbarian for Gruul.

At one extreme, the refluff-focused approach obviates the need to create new character options, which reduces the burden on the development team. The other hypothetical extreme involves developing a huge amount of crunch to account for all possible character archetypes, which simply isn't feasible. (Caveat: the crunch-fluff dichotomy presented here is perhaps reductive, and there are certainly more angles that this issue could be analysed from.)

Previous setting supplements have leaned more towards a more refluff-focused approach (GGtR, Mythic Odysseys of Theros), though Eberron: Rising from the Last War did have a healthy amount of unique crunch, featuring four new races, twelve new sub-races, and an entirely new class, the Artificer.

To be clear, there are supplements such as Xanathar's Guide to Everything and Tasha's Cauldron of Everything which are much heavier on the character option crunch. However, these supplements are more along the lines of compendiums of character options, which don't have the scope to explore thematic elements unique to certain settings through the medium of mechanics. This seems to be the province of supplements such as GGtR, which are explicitly themed around a specific setting.

Unfortunately, it appears that the reverse has occurred - setting supplements end up featuring a small handful of generic character options that are watered down to be compatible for subsequent reprinting in a compendium, e.g. the Order Cleric and Spores Druid, first seen in GGtR, reprinted in Tasha's.

Further, unique features from these supplements that could be used as infrastructure for new character options going forwards (Guild Spells from GGtR, Piety from Theros, Spells of the Mark from Eberron) don't seem to receive any further attention or development in other supplements afterwards.

This pronouncement may be premature, given that these observations are drawn from the past two to three years' worth of content, and game development takes time. WOTC might very well choose to explore the design space that these supplements have opened in future official products, but that remains to be seen.

It should also be recognised that unique features such as Guild Spells are invaluable tools for DMs to take and adapt for their own games, even if they aren't expanded on in subsequent official products. This critique is intended to highlight a shortcoming in WOTC's approach to setting supplements that the new design paradigm seen in Mages of Strixhaven UA has the potential to address. 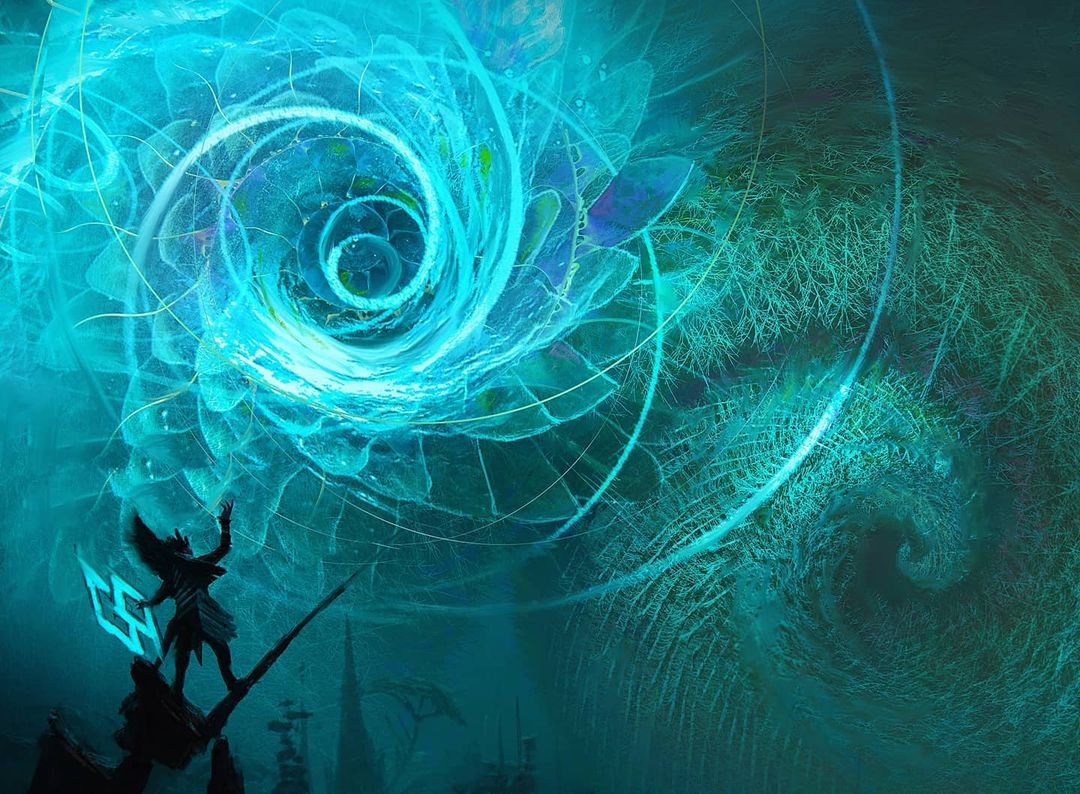 The Mages of Strixhaven UA outlines a model for subclasses that strikes a healthier balance on the crunch-fluff spectrum, enabling a deeper mechanical exploration of a setting's themes via the subclass system that can be scaled according to the number of unique factions in that setting, instead of requiring the developers to create (at least) thirteen classes' worth of subclasses.

Strixhaven has five colleges, so it gets five subclasses, each of which accomodates a number of classes. It might even be possible to develop five further subclasses for this setting to accomodate martial characters or half-casters within each of the colleges, given that the five subclasses seen in this UA only cater to full casters.

One could imagine this model being applied to Ravnica's ten guilds, setting out a list of classes that fit thematically within each guild and creating a "martial subclass" and "caster subclass" for that guild. For instance, Azorius could have Lawmage (Cleric, Wizard) and Arrester (Fighter, Paladin). Of course, the model definitely needs more refinement before it can be implemented elsewhere, but more on that below. 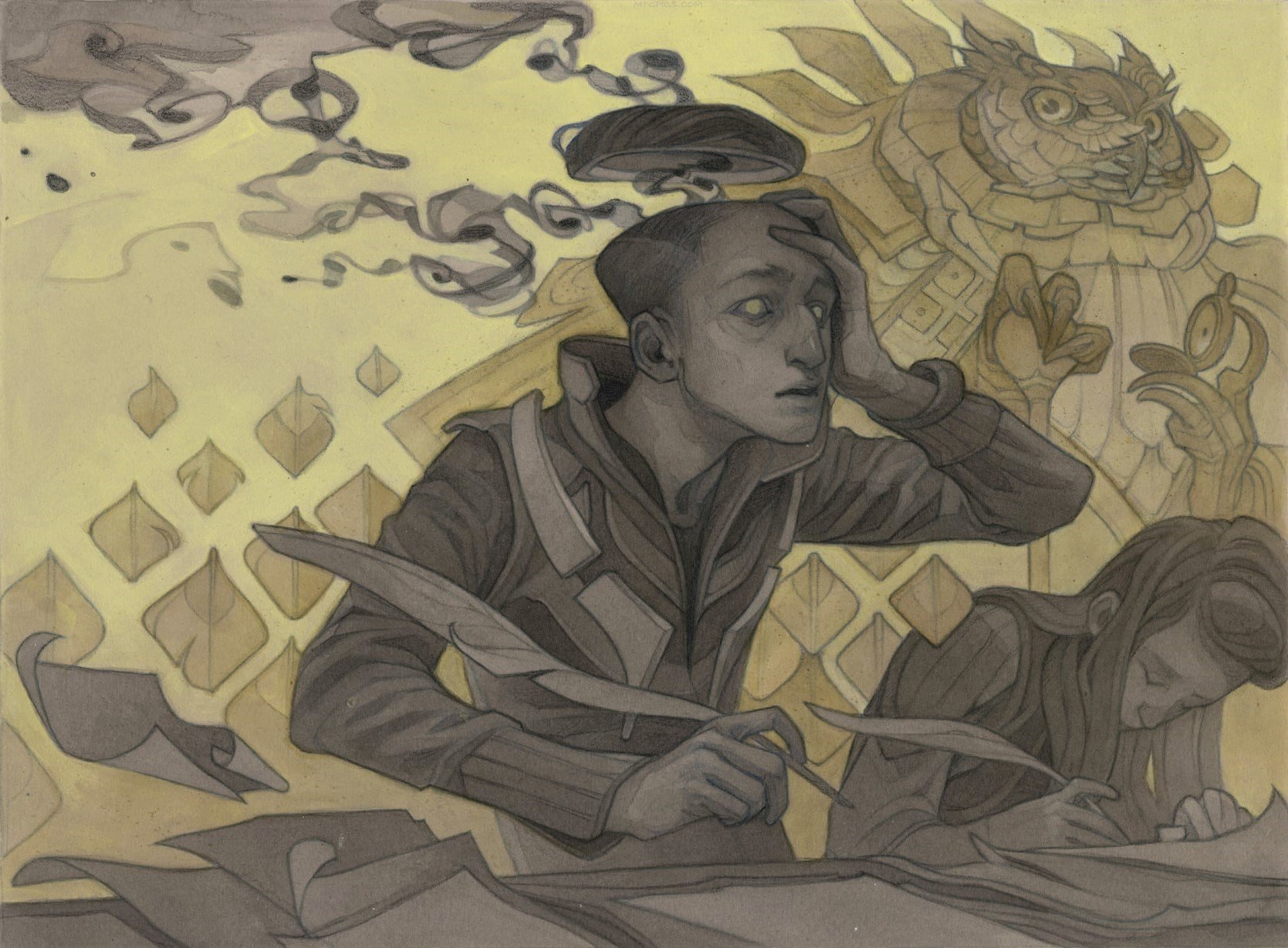 Note that this is not a blanket endorsement of every aspect of the Mages of Strixhaven UA. As many have pointed out, the subclasses aren't entirely mechanically balanced, and there are some flavor fails. There is also a problem with these subclasses not being able to interact with unique class resources like Channel Divinity, as seen with Cleric not being featured here at all, even though it would be a natural fit for Lorehold and Silverquill.

However, bear in mind that this is UA material -  it's still a proof of concept, and this is a concept worth developing and iterating on. This UA sets out a first draft of what this new model could look like. It has flaws and room for improvement, but there is undoubtedly potential design space to be tapped here.

5e has been relatively slow with new mechanical development, though interesting innovations in variant rules have been made in recent years, and it is laudable that WOTC isn't simply content to sit on its laurels and churn out more of the same year after year.

The next article will take a more in-depth look at the mechanics of the Mages of Strixhaven UA subclasses, evaluating them and considering potential solutions to problems, or different ways that cross-class subclasses could be implemented.

Thanks for reading this article! If you enjoyed it, consider following us on Twitter or Facebook to receive an update when the next one goes live, and/or sharing it to your friends with the links below!