Spelljammer has come to D&D 5e, bringing with it interplanetary exploration, galactic adventures, and thrilling combat in space! ...Right? Maybe? We'll get into it.

The Spelljammer setting has been around since at least the early 90s, in the days of D&D 2nd Edition.  Simply put, it construes the existing worlds of D&D as planets in a space ("wildspace", to use the Spelljammer terminology) system, which characters can traverse in ships called Spelljammers. Such ships must be fitted with magical helms, allowing spellcasters to fly these ships off-planet and into wildspace. (A spellcaster using a helm to move a ship is also referred to as a Spelljammer. The setting is also called Spelljammer. It's a mess.) Once your party is in wildspace, the galaxy's the limit - you can visit other planets, meet interesting people, and kill them.

The current official Wizards of the Coast literature for Spelljammer in D&D 5e consists of three books: 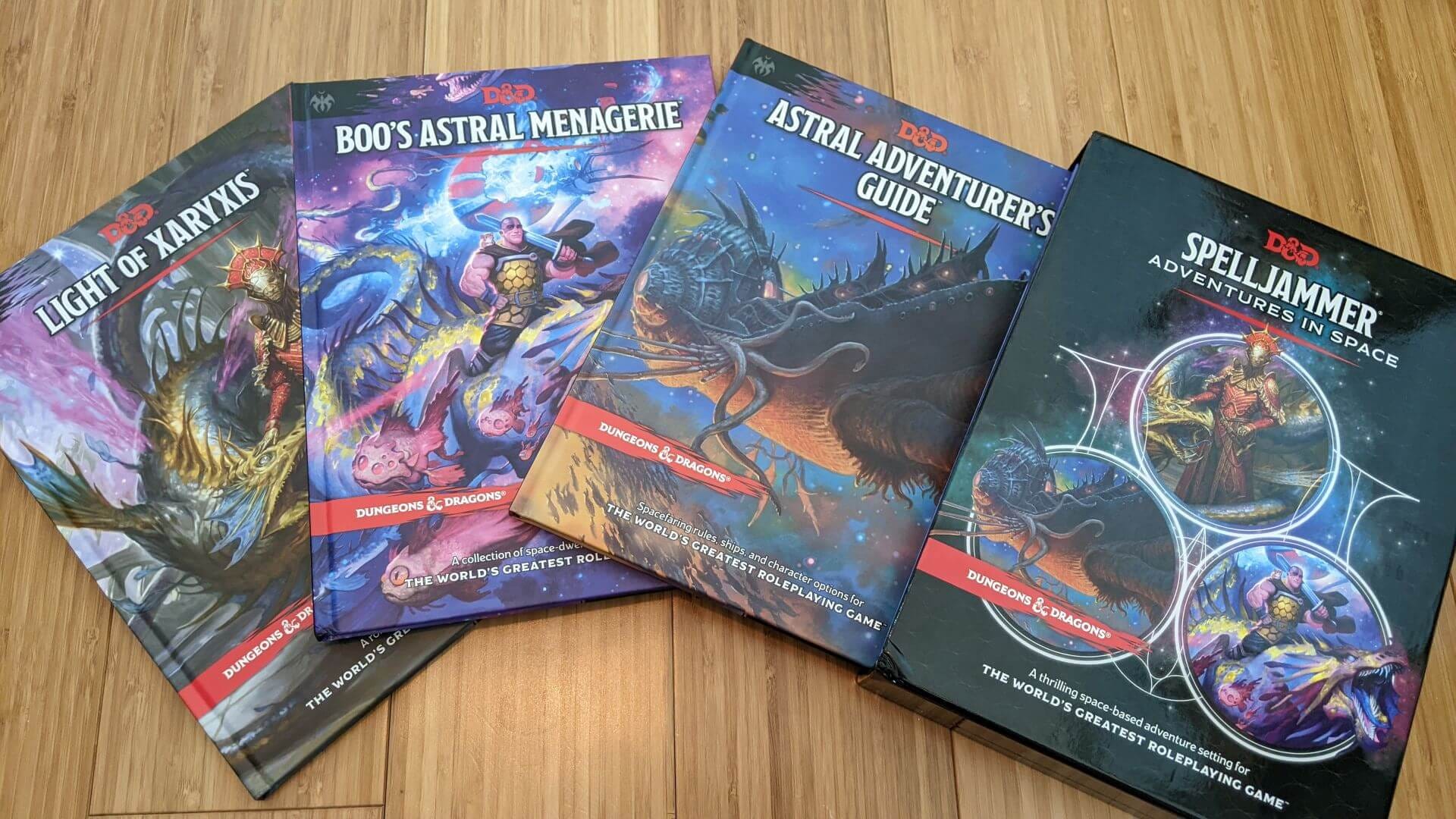 The answer to that question lies in part with what kind of fantasy Spelljammer is promising its players. Spelljammer is space fantasy that goes very hard on the rule of cool and very loose on the laws of physics, with much being handwaved away with magic. It plays into classic space opera tropes, with galaxy-spanning epic quests, interstellar intrigues, and fleets of starships clashing against each other in space.

Except not so much that last part. As it currently stands, the Spelljammer 5e material has little to no guidance on how to run ship-to-ship combat ("ship combat") at distances that go beyond what the regular D&D 5e combat system accounts for. It seems to be assumed that such encounters will be resolved via boarding, turning the situation into a regular combat scenario.

Is that satisfactory? Some DMs have taken the position that Wizards' intent was for DMs to improvise their own systems for running ship combat, and others have pointed out that they paid money for the Spelljammer books, and they shouldn't have to fill in gaps that they expected Wizards to cover. Either way, my point is that there is a demand for ship combat rules, because there is an expectation that a space fantasy setting will involve ship combat.

Ship combat is a staple of the space opera genre - Star Wars, Battlestar Galactica, Gundam, Macross - at some point, a conflict will be resolved via combat between starships in space. The fantasy of piloting a spaceship, engaging in combat against another ship, making tactical moves in space, firing on the enemy while evading return fire - this is one of the promises that Spelljammer implicitly makes to the player when it sells itself as a space fantasy setting. And the existing rules have not delivered.

The original 2e Spelljammer books did have rules for ship combat, as did the Starfinder books for the Pathfinder ruleset. Previous 5e books have developed rules for vessel-to-vessel combat, such as ships in Ghosts of Saltmarsh, or Infernal War Machines in Descent into Avernus. Each of these rulesets have their own pros and cons, but what they have in common is that they recognised the demand for a system to model and adjudicate a form of combat that the regular D&D rules do not. This system is what enables players to experience a fundamental aspect of Spelljammer's promised fantasy, and it should not be left to ad-hoc improvisation. I am certainly not the first person to notice this gap in the existing Spelljammer rules, nor am I the first to attempt to  fill it. Currently on DMsGuild, there is a ruleset titled "Spelljammer 5E 'Theater of the Mind' Ship Combat Rules - Created for the Tales From The Glass-Guarded World Podcast" ("GGW Rules"), which runs ship combat in the theatre of the mind. The GGW Rules were something of an eye-opener for me, as I had been looking at the aforementioned rulesets to get an idea of how ship combat should be run. I was mindful of the need to strike a balance between being too granular and bogging players down with unnecessary details, and being so rules-lite that there is essentially no system for ship combat (the current position), to arrive at a ruleset that is fun and captures the promised fantasy.

The theatre of the mind approach taken by the GGW Rules go in the right direction in achieving this balance, and I do recommend that anyone interested in Spelljammer ship combat take a look at them. I intend to use this approach, as well as some other ideas from the GGW Rules, in developing my own ruleset for ship combat.

The GGW Rules set out a number of crew roles that player characters can fill while aboard a ship, including Bosun, Captain, Gunner, and Helmsperson. The Helmsperson - the spellcaster using the ship's helm, a.k.a. the Spelljammer - plays a particularly important role in the GGW Rules, serving as the ship's pilot and making various tactical maneuvers. I would take a different approach, offloading the piloting role to the Captain. Intuitively, a martial character fits the role of an ace starship pilot better, and this approach gives martial characters additional cool things to do aboard the ship.  In my view, the Spelljammer has enough interesting things to do during ship combat - they are after all already a spellcaster, and can use their magic to contribute to the fight. (But how would they do this at the distances that ship combat takes place at? Not to worry, I have another round of homebrew lined up to address this.) 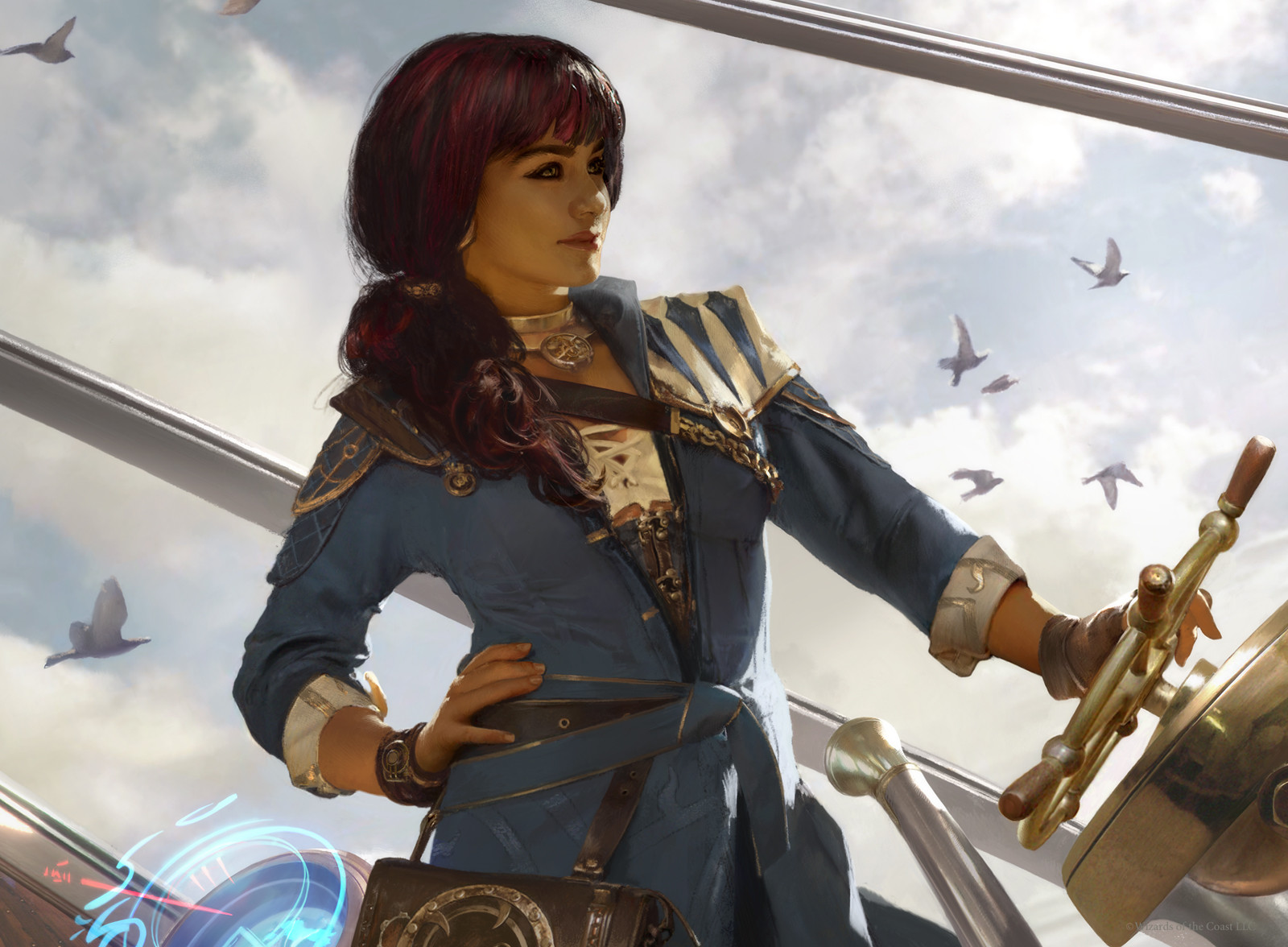 These ranges are mainly meaningful to the Captain, who is in control of directing where the ship goes, and how far it stays from enemy ships. Here, the Captain’s piloting skill becomes relevant, as do any factors that affect their ability to do so. In the GGW Rules, this is handled with a Helmsperson Maneuver check, as a measurement of the Spelljammer’s ability to pilot the ship. The GGW Rules used spellcasting and Arcana as the modifiers for this check, but since my approach offloads piloting to the Captain, I am using different parameters for the piloting check because it represents something different - not the Spelljammer’s magical ability, but the Captain’s piloting skill (a "Pilot check").

So, what variables should be relevant for a Pilot check? Firstly, there should be a proficiency involved, to represent the Captain’s training with piloting a spelljammer ship. An untrained character could try to take on this role, but they will definitely be less competent, and the lack of proficiency reflects this. What kind of proficiency is appropriate here? In general, and to keep things simple, any vehicle proficiency, land or water, would count. As for which ability should apply to a Pilot check, Dexterity would be the default, reflecting the Captain’s quick reflexes in steering the ship. However, different scenarios might test various facets of the Captain’s capabilities, so I leave it open for different abilities to be applied here - a Pilot (Charisma) check might be appropriate for a feinting maneuver, or a Pilot (Constitution) check to maintain a steady course through a challenging asteroid field.

Another factor that should be relevant to a PIlot check is the size of the ship being piloted. This is both intuitive and allows smaller ships to have some advantage over larger, better-armored ships with more hit points and armaments. The GGW Rules take size into account by assigning different sizes of ships Maneuverability Ratings, and adjusting their mobility accordingly. My approach would be to impose a penalty to the Pilot check commensurate to the ship's size, with size being calculated by the longest side of the ship. As a rough gauge, every 30 feet in length of the longest side of the ship (rounded down) imposes a -1 penalty to Pilot checks made with that ship. This will need playtesting to check balance, and the formula can be reworked if necessary, but it will serve as a first draft.

Pilot checks will be used to avoid and bypass wildspace hazards, but will also see use in ship combat, as seen in the GGW Rules' Helmsperson Maneuver Table. This table hits the mark in a few ways, as the maneuvers that it lists are: 1) resonant - they are derived from real-world naval maneuvers, 2) relevant, as each maneuver has a particular application, and 3) detailed enough to be flavorfully and mechanically distinct from each other while simple enough to execute in the theatre of the mind.

However, dumping the entire table on the Captain at one go would be quite the steep learning curve, and might lead to choice paralysis. My approach would be to have a list of basic actions any Captain can execute, and add specialized maneuvers as Maneuvers (as in battlemaster maneuvers, that use a superiority die and have a special effect). This also creates depth for design, allowing different classes to gain access to different thematic maneuvers - a Rogue Captain will have different tactics than a Barbarian Captain, for example. 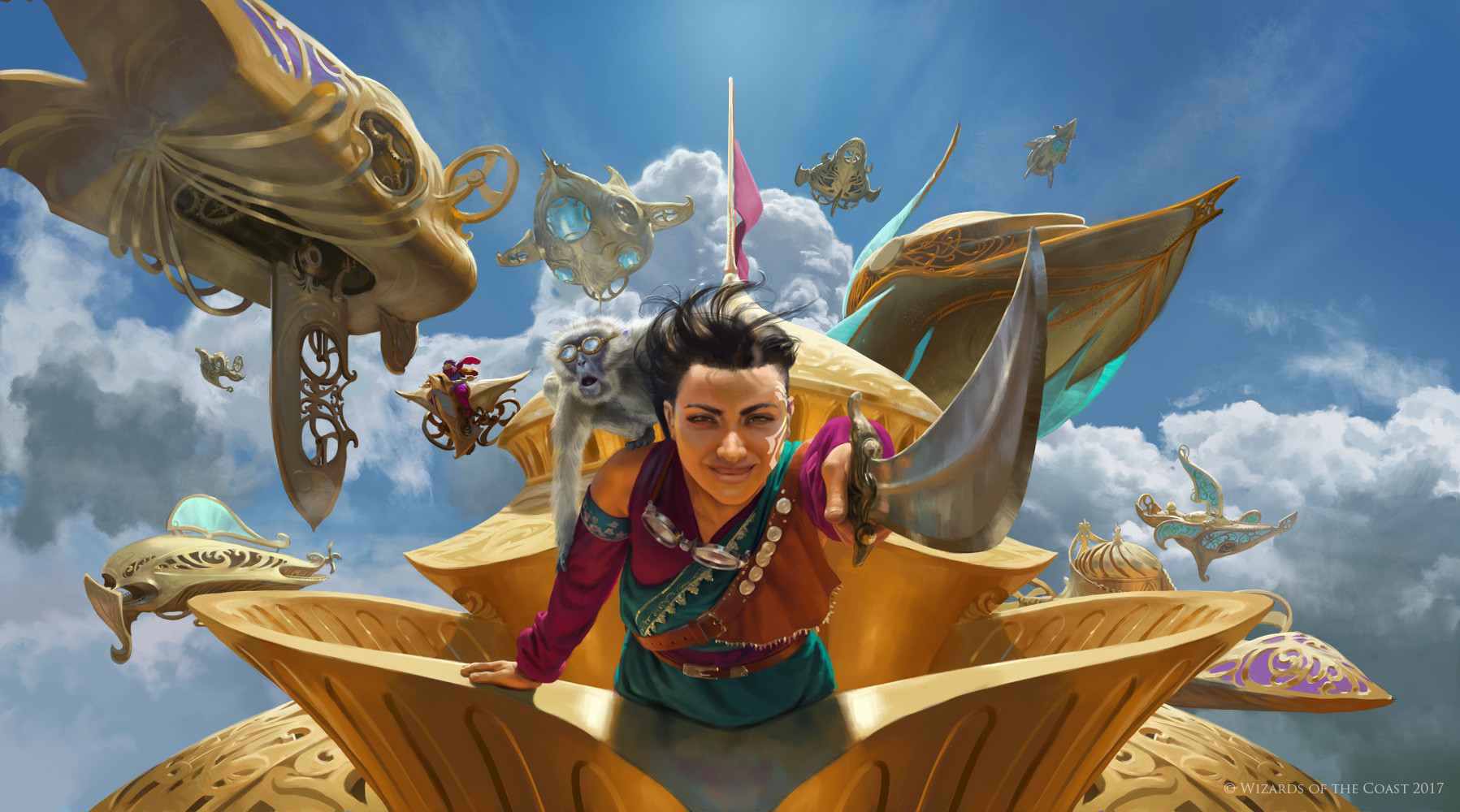 Another point where I would depart from the GGW Rules is the skill check that the Captain must make in order to execute any maneuver. In combat especially, there is a feel-bad factor in attempting to execute a simple maneuver only to roll low and waste a crucial action. Instead, I would keep Pilot checks in combat as opposed checks made between opposing Captains as far as possible - there is still success and failure, but the fantasy is that of one Captain outmaneuvering the other, which is more dramatic.

The basic actions for ship combat that I would give all captains are as follows:

On the foundation of these basic actions, we can build a wide range of specialized maneuvers:

This is just a proof of concept for now, but already we can see some variety and depth in how different maneuvers push Captains towards different tactics in ship combat.

In conclusion, a theatre of the mind approach, along with three distinct range categories and a distinct Captain role in charge of maneuvering the ship, allows for ship combat that is distinct from regular D&D combat, captures the promised fantasy of spaceship-to-spaceship combat, and is dynamic and engaging in its own right. At the same time, it is compatible with the existing ship and siege weapon rules, and mainly uses concepts that players will already be familiar with - advantage/disadvantage and opposed ability checks.

But enough about the Captain - what about everyone else on the ship? Do they get to do anything interesting? Of course they do - both Ghosts of Saltmarsh and the GGW Rules have set out a number of crew roles that players can take up. For my part, I have distilled these into:

The concept of a crew working in concert (or out of it, to disastrous consequences) during a heated ship-to-ship battle is a popular trope both in space and on the sea. I personally have fond memories of playing Sea of Thieves with friends, where each of us had to perform a particular role in and out of combat, but also had to adapt to evolving situations on the fly. Good division of labor, communication, and leadership are all key in these situations, and I would like to bring these to my version of Spelljammer. Next time round, I'll expand on these roles, possibly going over each one in turn.