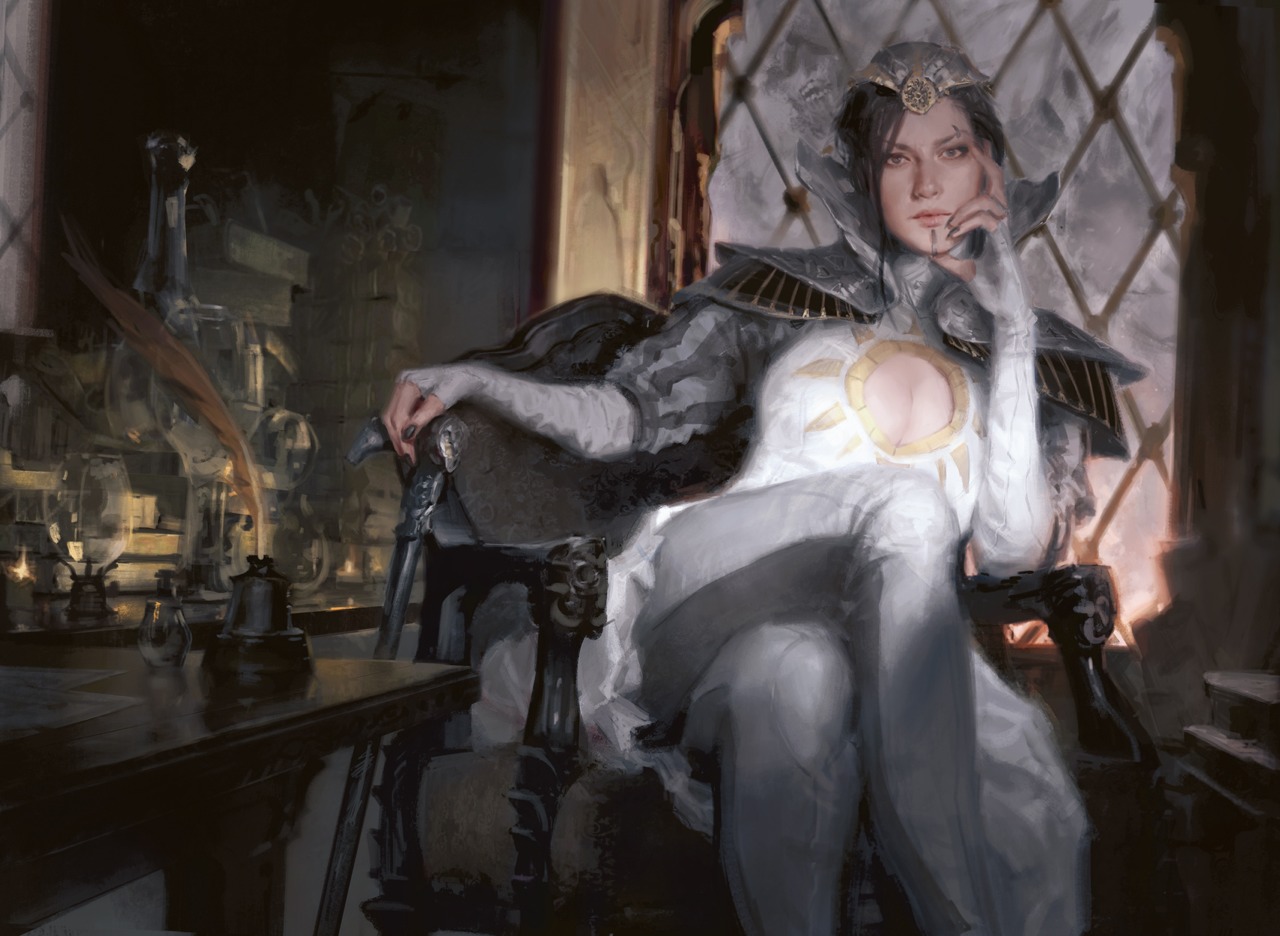 This week, we tackle Orzhov, the white/black aligned religious institution/organized crime ring of Ravnica. The theme and mechanics of Orzhov have always been quite clear and resonant - they use the trappings of religion combined with the methods of organized crime to bleed their targets dry, one cut at a time.

The original guild mechanics of Orzhov were Haunt, Extort, and Afterlife. Haunt and Afterlife leant more into the religious and supernatural aspects of the guild, granting benefits when creatures died, whereas Extort played up the crime angle, sucking life out of your opponents steadily.

Here, I chose to implement Extort as the main shared mechanic between the subclasses, conceptualizing it as a small act that could be scaled into the lategame by giving characters more and different opportunities to activate it.

The act of extorting grants characters credit points, which can then be spent, creating a cycle of resource generation and expenditure that fits into the conventional D&D action loop. However, extort also has a mini decision-tree built into it - the character can either gain credit points, or deal extra damage. The upside to dealing more damage is self-evident, which made it important to ensure that the payoff for spending credit points in other ways was worth it. Regaining health is both a relevant benefit and a complement to extort's bonus damage function, making it a natural fit, though the amount of health regained was intentionally kept on the lower end.

For spellcasters, the ability to enhance enchantment and necromancy spells is plenty strong, and leans into Orzhov's sinister theme without stepping on the Sorcerer's Heightened Spell too much. For martials, there were any number of benefits that spending credit points could have granted, but it occurred to me as I was assembling the Paladin's spell list that since these spells were meant to be representative of Orzhov's theme, I could economize on effort while reinforcing consistency within the subclass by making them the credit point payoffs for Fighters and Rogues as well.

Using inspiration from one class's subclass design to inform and streamline design decisions for other classes feels right, and is one of the reasons that cross-class subclass design has struck such a chord with me.

The Church of Orzhova demands that every citizen of Ravnica pay its dues in one form or another, and its representatives wield the church’s authority with an iron fist. When you extort a creature, you choose whether to deal 1d6 necrotic damage to the target, or gain a credit point instead. As an action, you can spend any number of credit points to bolster your vitality, regaining 1d4 hit points for each credit point spent.

The maximum number of credit points you can have at any time is equal to your proficiency bonus, and you pass all remaining credit points to the Church at the beginning of each long rest. 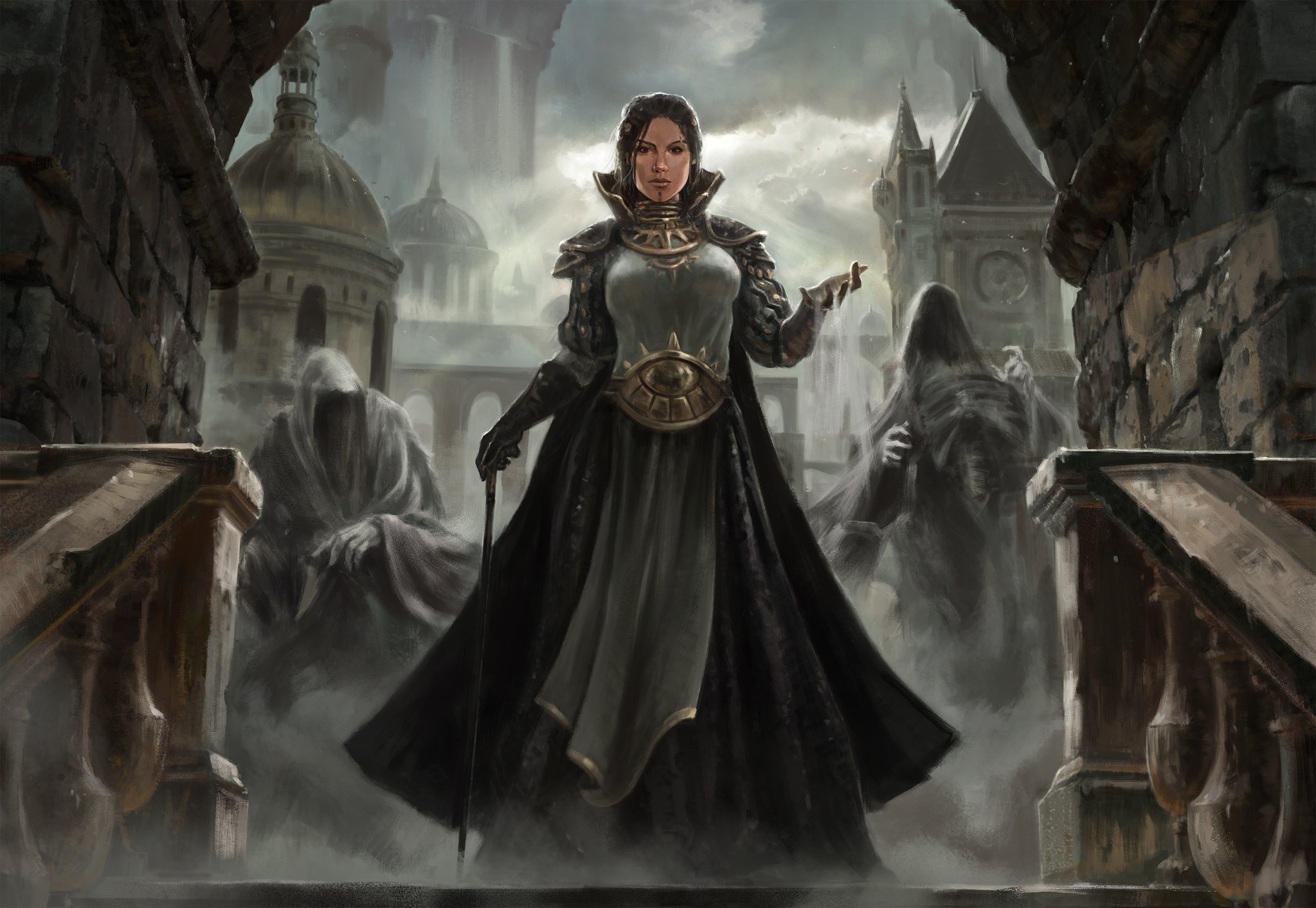 Spellcasters in the service of the Church of Orzhova apply their magic to the furtherance and protection of the Church's interests.
Orzhov Wizards draft airtight agreements and devise financial instruments that entrap debtors in bonds of obligation stronger than steel, zealously prosecuting those who dare to default or breach. Orzhov Clerics and Warlocks draw on the Ghost Council's power to drag their servants back from the afterlife, and even stay one step ahead of their own mortality.

You learn the chill touch and friends cantrips. You learn additional spells when you reach certain levels in this class, as shown on the Orzhov Advokist Spells table.

Each of these spells counts as a class spell for you, but it doesn’t count against the number of spells you know. If you are a cleric, you always have the spells prepared, and they don’t count against the number of spells you can prepare each day. If you are a wizard, you can add these spells to your spellbook upon learning them, without expending any gold, and prepare them as normal.

As a representative of the Church of Orzhova, you can use your magic to collect the tribute that is due to the Church, whether it be in blood or credit. Whenever a spell you control deals damage to a hostile creature, you can extort that creature. 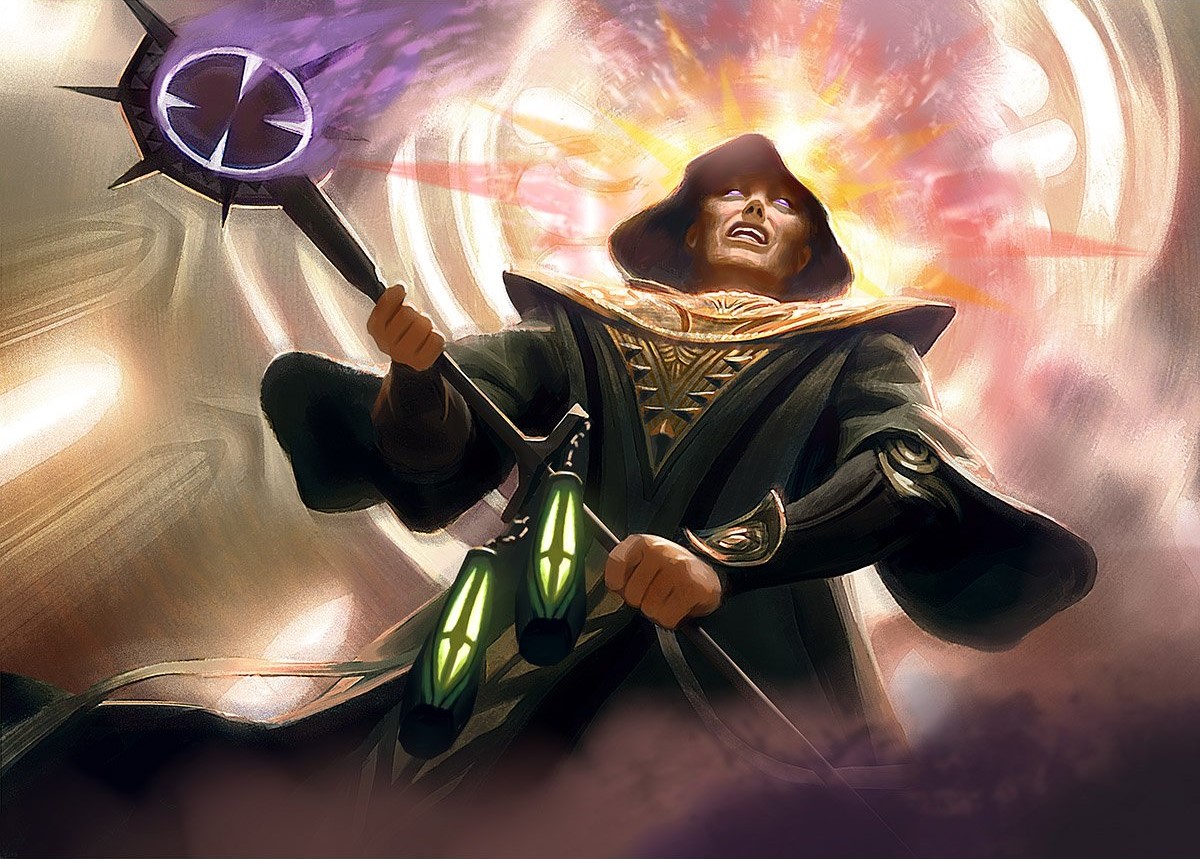 As an action, you invoke the authority of the Church, compelling all present to pay tribute. You extort each creature of your choice within 30 feet, then gain temporary hit points equal to the necrotic damage dealt. 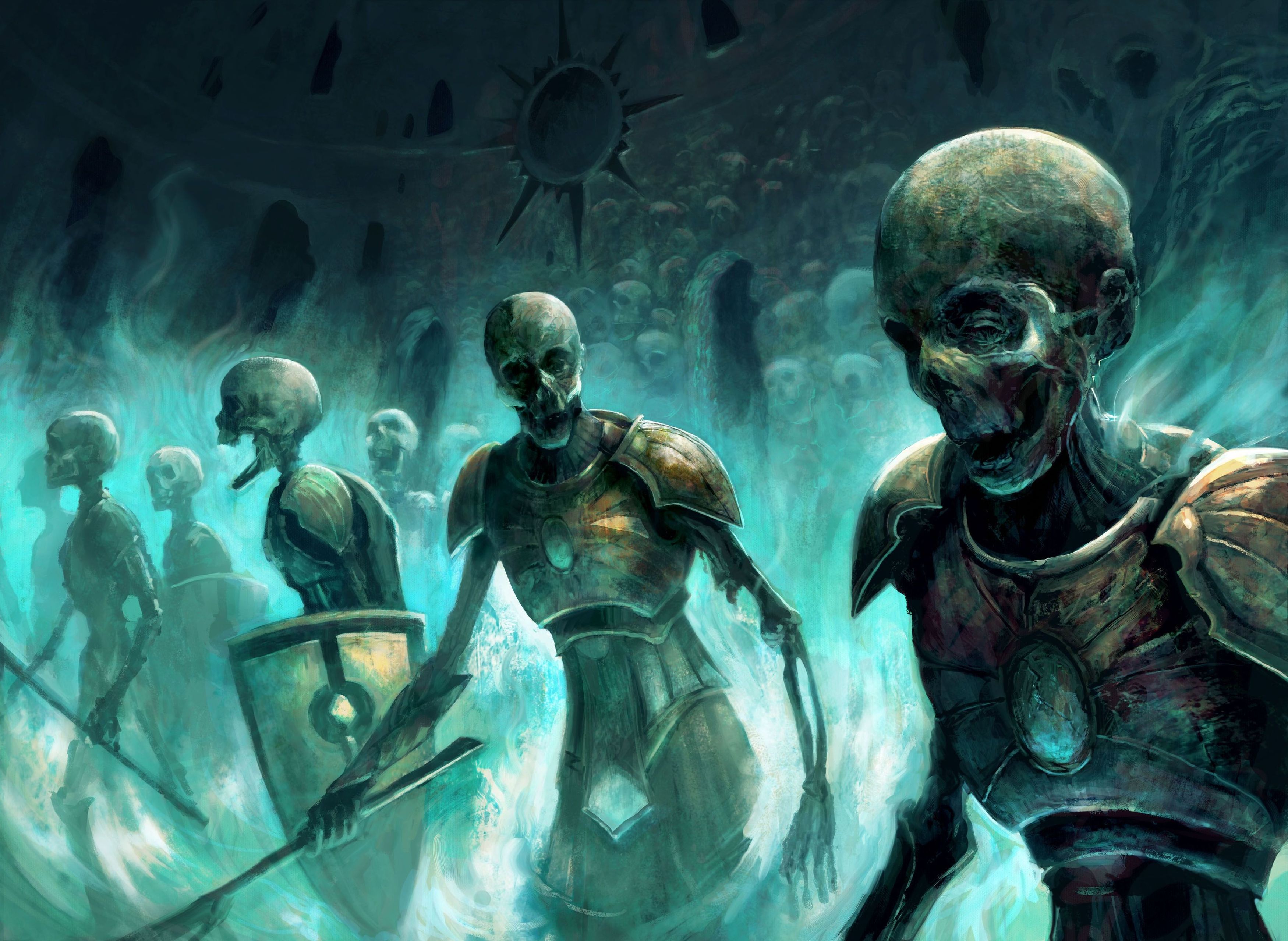 As a reaction when a friendly creature within 30 feet of you is reduced to 0 hit points or dies, you can spend a credit point to allow their spirit to serve as a revenant, even as their physical form drops. A creature that is at 0 hit points continues to make death saves as normal, and can continue to serve as a revenant even if its physical form dies.

A revenant is identical to its normal self, except that it appears ghostly and luminescent, and it cannot take damage. At the end of a revenant’s turn, you must spend a credit point for each round it has been active. If you choose not to spend credit points in this way, or don’t have enough credit points, the creature’s servitude ends, and its revenant form dissipates.

You add your spellcasting modifier to the damage you deal with any cantrip.

You can hold enemies to account for the wrongs they have committed against you or those under your protection. As a reaction when a hostile creature deals damage to you or a friendly creature within 30 feet of you, you can extort the hostile creature X times, where X is the damage dealt divided by five, rounded up. You can use this feature a number of times equal to your proficiency bonus, and regain all expended uses when you finish a long rest. 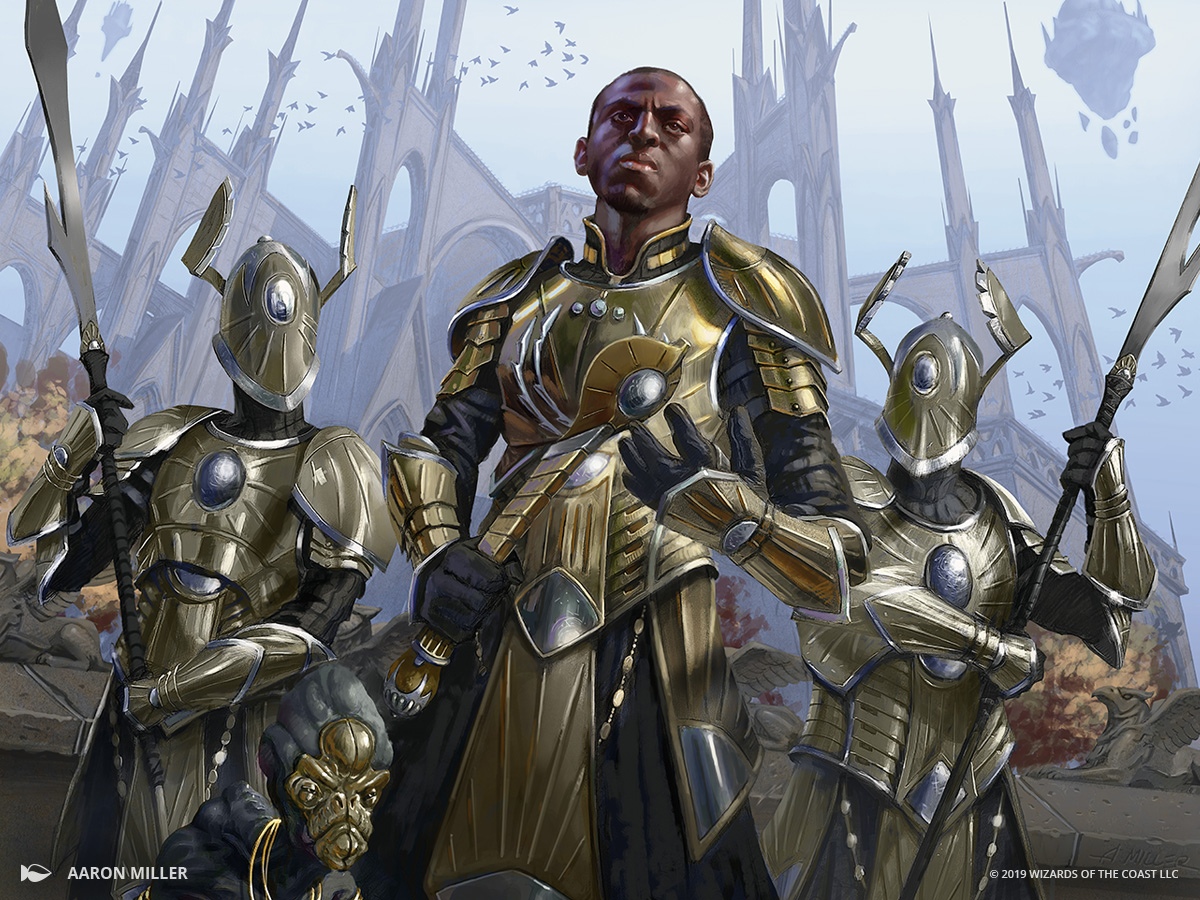 Enforcers are the rank-and-file of the Church of Orzhova's members, serving as the iron hand in the Church's velvet glove.
Orzhov Fighters and Paladins patrol Church territory possessively, ensuring that turf under Orzhov protection remains free from any trouble that the other guilds might raise - and collecting fees from the grateful residents of the district. Orzhov Rogues pay discreet visits to debtors, quietly reminding them of their obligations, or directly laying claim to their property if payment has been in arrears for too long.

You learn additional spells, and you can cast them with spell slots you have of the appropriate level, or with the Syndicate Enforcer feature.

As a ground-level representative of the Church of Orzhova, you take matters into your own hands when it comes to ensuring that debtors pay their due. You become proficient in two of the following skills of your choice: Stealth, Insight, Intimidation, or Persuasion.

Your methods of extortion vary depending on your class:

As an action, you can use your Channel Divinity to invoke the authority of the Church, compelling all present to pay tribute. You extort each creature of your choice within 30 feet, then gain temporary hit points equal to the necrotic damage dealt. 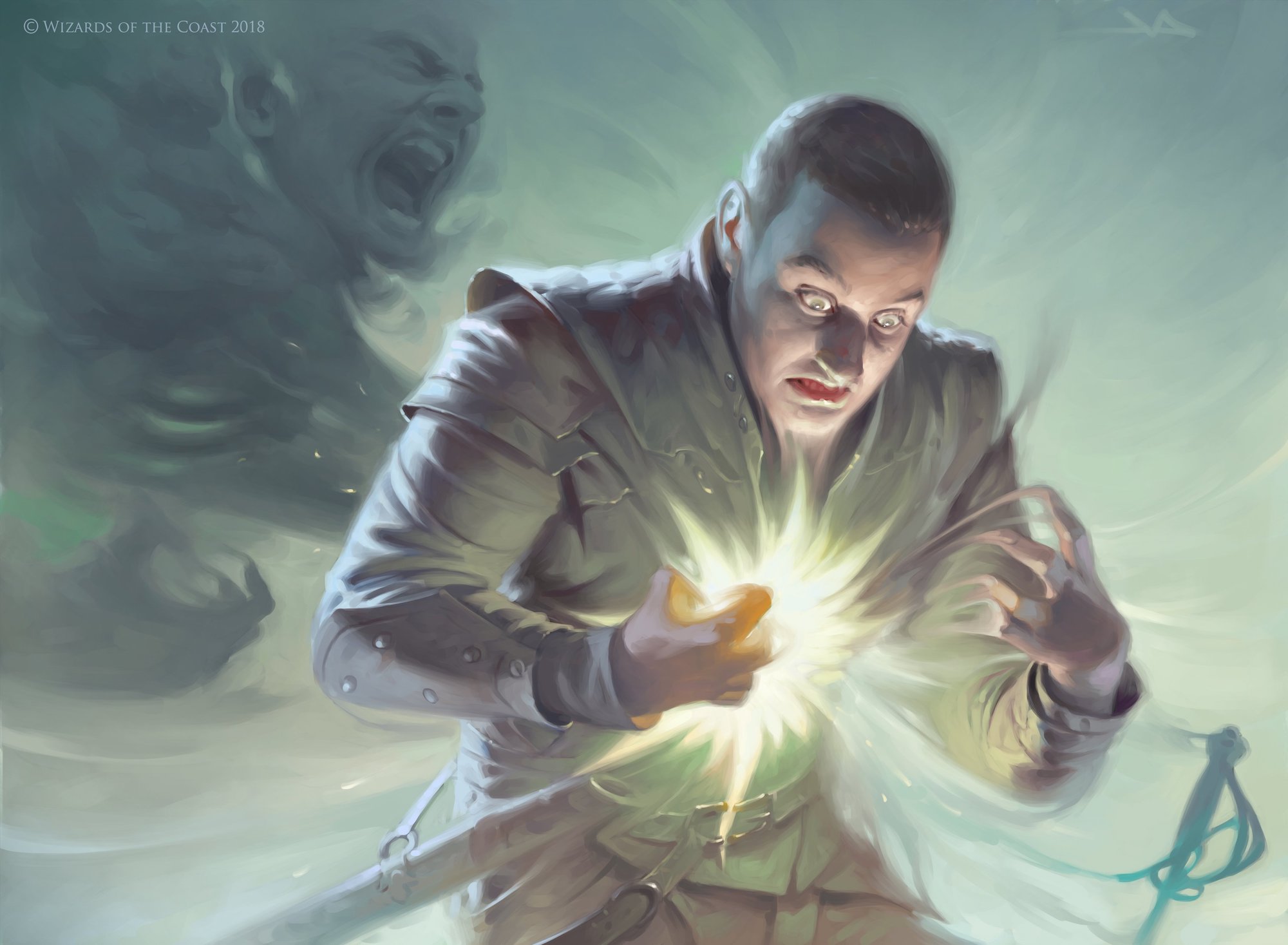 As a reaction when you hit a hostile creature with a melee attack, you can use your Channel Divinity to extract its soul, down to the last dregs. You extort that creature a number of times equal to your spell attack modifier.

Even as you end a debtor’s mortal tenure, you can bind their immortal soul to your service for a time. As a reaction when you slay a humanoid, you can spend three credit points to bind its spirit to your service. A bound spirit uses the shadow stat block in the Monster Manual, except that it only has 1 hit point, and it cannot create additional shadows.

The shadow acts on your initiative, immediately after your turn. It obeys your verbal commands, and it gains a special bonus to its attack rolls equal to your proficiency bonus. The shadow remains in your service until the end of your next long rest, at which point it has served the balance of its debt and is released to the afterlife. You can only have one shadow bound to your service at any time.

If you’re a Paladin, you can use this reaction whenever any humanoid dies within 30 feet of you. At 18th level, the range of this feature expands to 60 feet.

When you hit a hostile creature with a melee weapon attack, instead of extorting it, you can spend any number of credit points. If you do, that creature must make a Constitution saving throw (DC 8 + your Charisma modifier + your proficiency bonus). On a failed save, it takes 2d6 necrotic damage for each credit point you spent, in addition to the normal damage of the attack. On a successful save, it takes half as much necrotic damage.

Additionally, whenever you hit a hostile creature with a melee weapon attack, you can extort it twice. 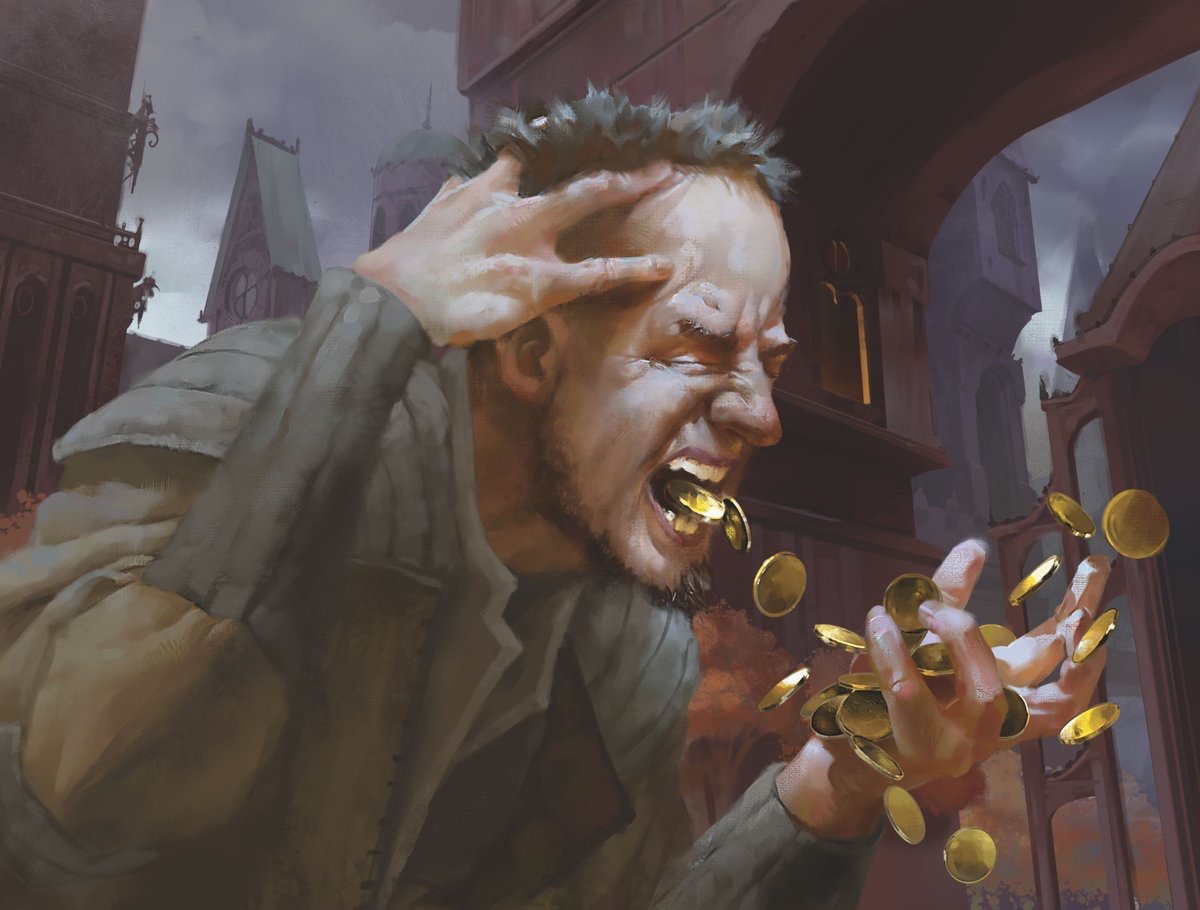 You can summon a bevy of spiritual servitors to aid you in combat. As an action, you can spend six credit points to cast spirit guardians. When you cast spirit guardians in this way, the spell doesn’t require concentration, has a 30-foot radius, and you can extort any creature that fails its save against the spell. 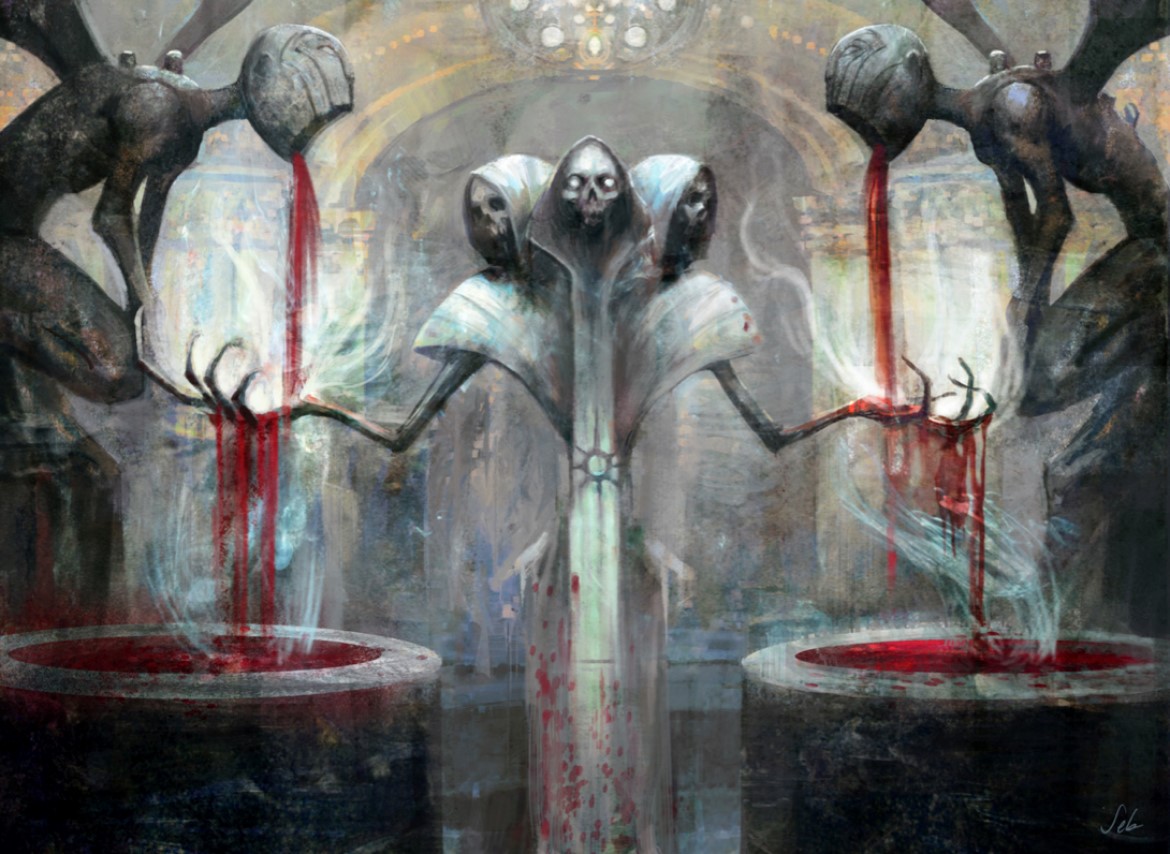 Debt to the Deathless
1st-level necromancy
Casting Time: 1 action
Range: Self (30-foot radius)
Components: V, S, M (an offering tray)
Duration: Instantaneous
Classes: Cleric, Paladin, Warlock, Wizard
You present your outstretched palm, compelling all present to pay their dues.
You extort each creature of your choice within 30 feet of you.
At Higher Levels. When you cast this spell with a spell slot of 2nd level or higher, you extort each creature an additional time for each slot level above 1st.