DOTA 2 is one of my favorite games, though that might just be the Stockholm Syndrome speaking - I have more than 5000 hours clocked on that game. To celebrate the release of the Dragon's Blood anime on Netflix earlier this year, I brewed up a bunch of magic items inspired by characters and items in DOTA 2.

This longbow is crafted from wood as dark as the night sky, and its bowstring seems to twinkle with inner light. When attuned, it functions as a +1 longbow.
Spells. The longbow has 6 charges. While holding it, you can use an action or a bonus action to expend 1 or more of its charges to cast one of the following spells: jump (1 charge, self only), pass without trace (2 charges), ensnaring strike (1 charge), conjure volley (3 charges). The spellcasting ability for these spells is Wisdom.
The longbow regains 1d6 expended charges daily at nightfall.

Design Notes
This item is intended to capture the feel of playing Mirana, the titular Princess of the Moon, in the video game DOTA 2. Some of Mirana's iconic abilities, such as Leap and Moonlight Shadow, can be approximated reasonably closely with spells like jump and pass without trace. Her powers in the Dragon's Blood anime have also been nodded to with conjure barrage, which fills the gap that Starstorm would normally have occupied. 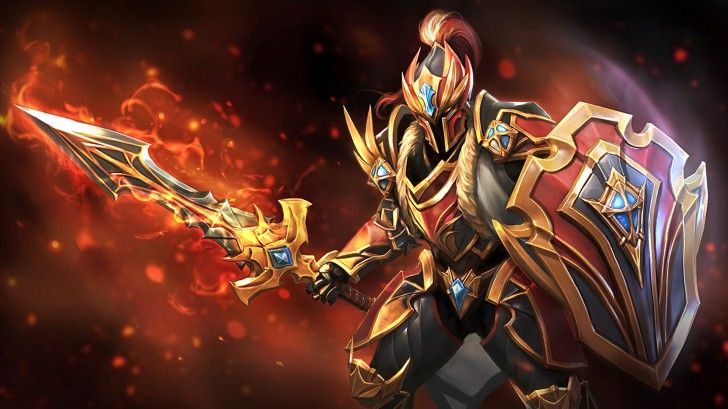 Scale of the Dragon Knight

This shield is forged from a red dragon's scale, embellished with gold inlays. When attuned, it functions as a +1 shield.
Spells. The shield has 6 charges. While holding it, you can use an action or a bonus action to expend 1 or more of its charges to cast one of the following spells: fireball (3 charges), staggering smite (3 charges). The shield regains 1d6 expended charges daily at dawn. The spellcasting ability for these spells is Charisma.
Dragon Blood. While the shield is on your person, you regain 1d6 Hit Points every 10 minutes, provided that you have at least 1 hit point.
Dragonform. As an action, you can draw on the shield's draconic energies to transform yourself into a red dragon wyrmling, as though using a druid's wild shape feature. At 17th level, you instead transform into a young black dragon. The transformation lasts 10 minutes, and you can end it as a bonus action. After transforming, you can't transform again until you complete a long rest.

Design Notes
Some of the Dragon Knight Davion's abilities, especially in the DOTA 2 video game, don't map cleanly to existing D&D spells. Breathe Fire and Dragon Tail can be approximated with fireball and staggering smite, while Dragon's Blood is reflected in the AC increase that the shield grants, as well as the ring of regeneration effect.

However, Elder Dragon Form wasn't as easy to properly capture. In the end, I decided to use the druid's wild shape feature as a template to work off of, using rules that most players would already be familiar with. The red dragon wyrmling and young black dragon were chosen to reflect Davion's lore and gameplay, as well as to keep this ability at a level where it would be powerful, but not overpowered.

This set of three crystal spheres cycle through three scintillating colors - blue, purple and orange. When attuned, they hover around your head, slowly moving in a circle, and you gain a +1 bonus on your spell attack rolls and your spell save DCs. You can use them as a spellcasting focus while attuned in this way.
Spells. The orbs have 6 charges. While attuned to them, you can use an action to expend 1 or more of their charges to cast one of the following spells: invisibility (self only, 1 charge), wall of ice (3 charges), conjure minor elementals (2 charges), haste (2 charges), flaming sphere (3 charges, cast at 5th level). The orbs regain 1d6 expended charges daily at dawn. The spellcasting ability for these spells is Intelligence.
Design Notes
In DOTA 2, Invoker is a powerful and learned wizard, with a whole suite of spells at his disposal. This item doesn't attempt to replicate all 10 spells that Invoker can invoke, instead focusing on just a few spells that can be approximated relatively easily with existing D&D spells.
Initially, I had designed this item to only be usable by wizards, but later decided that it would be more interesting if any spellcaster could use it. After all, wizards already have these spells available to them, so restricting this item to them didn't make that much sense either.

This golden ring is wrought in a design that calls to mind a demon baring its fangs. When attuned, you can use a bonus action to press the ring's fangs into your skin, drawing blood. You lose 2d6 hit points, and gain a temporary 1st-level spell slot. If you don't use this spell slot to cast a spell, it disappears at the end of your turn.

Design Notes
In DOTA 2, Soul Ring is a simple item which fulfils a particular niche - converting health into mana, the resource that heroes use to cast spells. The closest equivalent item in D&D is the Pearl of Power, which can restore a spell slot of up to 4th level one time each day.

I wanted Soul Ring to function on a smaller scale in terms of the spell slot it restores, in line with its place in DOTA 2 as an early game item. Further, I wanted to ensure that its main use was in combat, rather than being used to restore slots out of combat.

As an action, you can activate the scroll while focusing on a destination where you have completed a long rest within the last week. The scroll replicates the effects of the teleport spell, and you are treated as though you are very familiar with the destination. After being activated, the scroll is consumed.

Design Notes
One of the classic items of DOTA 2 all the way back to Warcraft III, the Town Portal Scroll plays a critical role in how every single game of DOTA plays out.

Given that the teleport spell already exists in D&D 5e, it was just a matter of capturing the flavor of the TP Scroll by requiring that it target 'home', defined as somewhere that the user has rested recently.